Bauchi State governor Bala Mohammed said the People’s Democratic Party (PDP) would have given former Lagos State governor Bola Tinubu a consensus ticket if he was a member of the party. 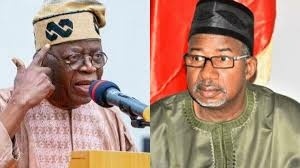 He credited Tinubu for the formation of the APC and the subsequent election of President Muhammadu Buhari in 2015 to unseat former President Goodluck Jonathan of the PDP.

“I told him (Tinubu), if you were in PDP, we would have given you the (presidential) ticket because we know that without you, (Muhammadu) Buhari wouldn’t have been the president.

“In PDP, we recognise contribution. We have people in Nigeria that we must recognise and it was definitely a good outing for me.”

Mohammed commended the host of the dinner Aisha Buhari, describing her “as a unifier and has shown that she is a mother of the nation.”

Mrs. Buhari urged political parties and aspirants to ensure fair play and build bridges of peace during the elections.

“We must replicate the 2015 experience by ensuring a free, fair and violent free election in 2023. Ensure fair play and build bridges where necessary. Our journey is irreversible. You must remain focused on issues that strengthen the nation,” Mrs. Buhari said.

She also noted it was “high time women were adopted as running mates at all levels considering their voting strength and active involvement in political processes.”