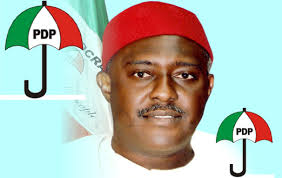 Metuh told journalists in Abuja on Wednesday that Dokpesi’s statement cannot be taken as PDP official position on the subject, as he was not a member of the party’s National Executive Committee. “Dokpesi could only speak in his personal capacity and his opinion remains personal and did not represent that of the party,” Metuh said.

On PDP’s choice to field former President Goodluck Jonathan in the 2015 presidential race, the PDP spokesperson claimed that the decision was approved by the party’s National Working Committee (NWC) as well as the party’s National Executive Council (NEC), and the National Caucus.

“In addition, the Constitution of the party allows a sitting president the chance to exercise his personal right to run for a second term if he so desires,’’ he said.

According to him, the party has no reason to regret its actions because it was taken with popular consent. “How can you regret a decision taken when everyone was there, the NWC, NEC and the national caucus? What are we talking about? Everybody was conscious of the decision; nobody was coerced into supporting the position,” he said.

Metuh, however, stressed that it was not the time for buck-passing or blame-game but time to collectively reposition the party. “We are repositioning our party. What we should do is to join hands to reposition PDP based on Sen. Ike Ekweremadu’s report to reclaim the party’s lost glory. This is what is expected of us all at this time,’’ Metuh said.

Dokpesi had on Tuesday issued a statement on behalf of the PDP apologising for what he called the mistakes the party made during its 16 years rule in the country.

“We are aware of the errors of the past 16 years, as human beings, we must have made mistakes and we could not meet the expectations of Nigerians, for that we tender an unreserved apology,” Dokpesi said.

Disclosing that the party’s national conference would hold at the Thisday Dome in Abuja on Thursday, Dokpesi claimed that the PDP had learnt from its mistakes and that the conference was planned to find ways of reviewing issues fundamental to the promotion and sustenance of good governance and democratic ideals in Nigeria.

He identified some of the mistakes made by the PDP to include a deviation from the vision and principles of the founding fathers of the party, with the decision to abandon its zoning formula proving its greatest albatross. “The first fundamental mistake was made in 2010-2011 by not allowing the North to complete its tenure,” he said, stressing that the party would use its latest national conference to show Nigerians that its new leadership “mean business” and “are determined to turn things around.”