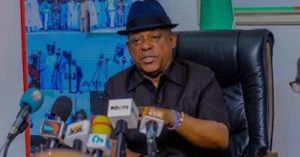 A fresh crisis may be brewing in the Peoples Democratic Party as a Concerned PDP League, also known as ‘PDP Watchdog’, demands the resignation of the Party’s Chairman/Board of Trustees, Walid Jibrin; National Chairman, Uche Secondus; Financial Secretary, Abdullahi Maibasira, and other members of the National Working Committee.

The organisation said the demand became necessary following the failure of the PDP leaders to provide strong opposition leadership that the PDP patriots and Nigerians were yearning to salvage Nigeria from the brinks of political, economic, and social collapse.

The leader of the Concerned PDP League, Daboikiabo Warmate, who read the demands during a press conference in Abuja, challenged the party’s leadership to give Nigerians people-oriented strong opposition.

He also called on the Senate to reject the nomination of Lauretta Onochie as a National Commissioner of the Independent National Electoral Commission.

According to him, the PDP helmsmen should lead a one-million man protest against the daily killings, hunger, increase in food price, insecurity, delay in the passage and signing of the electoral bill into law.

He said, “The National Chairman, Prince Uche Secondus, and his team were unable to galvanise and harmonise the plethora of individuals, groups and regional interests, and this has led to a series of decamping, court cases and crises in some states and local government area chapters.

He said the nomination of Onochie was “inconsistent with any and every electoral law in Nigeria, most especially Section 153 Subsection 3 and item F, Paragraph 14(2)(c) of the Third Schedule of the 1999 Constitution, as amended.”