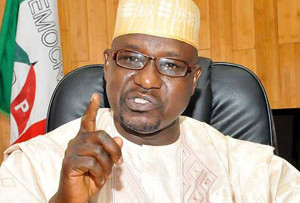 The leadership crisis rocking the People’s Democratic Party (PDP) took a fresh twist on Wednesday as, Alhaji Ahmed Gulak, the former political adviser to ex-President Goodluck Jonathan, stormed the national secretariat of the party and declared himself the new national chairman.

Gulak, who arrived at the Wadata Plaza, PDP National Secretariat at about 1.45 pm, in company of horde of supporters, including former presidential spokesman Dr. Doyin Okupe claimed he was taking over the mantle of leadership following a December 15, 2015 High Court judgment that declared Prince Uche Secondus acting chairmanship illegal.

According to Gulak, a stay of execution of the judgment filed by Secondus was struck out early on Wednesday by the court where the application was filed, thereby paving the way for him to assume helm of affairs at the party’s secretariat.

Speaking to reporters on his mission, Gulak said he came to assume office as national chairman on the strength of a December 16 High Court judgment voiding the appointment of Prince Uche Secondus as acting national chairman.

“By the operations of the law and the court order, I now assume duty as the National Chairman of our great party; especially as the court has today struck out the motion for stay of execution”, Gulak declared.

“Based on our sincere commitment and loyalty to our great party, we cannot continue to leave our party headless. Failure to assume duty as the national chairman will leave our party organs, especially the NWC, the NEC and the National Caucus, improperly constituted as every meeting of these groups must, in accordance with our constitution, be chaired by the National Chairman”, he stressed.

The former presidential aide dismissed the notion that his decision to fight for the party national top seat was a selfish power-play. “This struggle is not about me but about our great party, which must be repositioned for the task ahead. We must give back the party to the people who must at all times decide the way forward.

“My assumption of office is to prepare the ground for the NEC of the party to meet and take the most appropriate decisions for our party.

“This should not be seen as a contention against anybody or group of persons. I crave the indulgence of the other NWC members to partner positively with me in our efforts to pick up the pieces and rebuild our party.”

Secondus, it would be recalled, became the acting chairman of PDP following the resignation of the party’s chairman, Alhaji Adamu Mu’azu, on May 20, 2015. The development which left the Northeast without a principal officer in the party did not go down well with some stakeholders from the zone.

Gulak, one of the party leaders not comfortable with the power swing, had challenged the choice of Secondus in court and secured favourable judgment, with the court ordering Secondus to vacate the position within 14 days. The 14 days ultimatum elapsed on December 29, 2015 but Gulak waited for the court to decide on the stay of execution filed by the party leadership.

“At the expiration of 14 days, the defendants failed, refused or neglected to obey the court orders to appoint me or any other person from the Northeast zone”, Gulak explained.

Secondus’ Camp Object:
Although, members of the party’s National Working Committee (NWC) stayed away from the secretariat after locking up their offices and major conference rooms, apparently aware of the development, Secondus henchmen have rejected Gulak’s forceful take-over of the party’s mantle of leadership.

They described Gulak as a fifth columnist sponsored by enemies of the PDP to tear the party apart. Addressing reporters at a different location shortly after the invasion, the party’s National Legal Adviser, Victor Kwom, said the judgment did not pronounce Gulak as chairman.

According to him, Secondus and the party appealed the judgment and the appeal is pending. He added that there was no fact to support Gulak’s claim that a stay of execution on the judgment had been struck out.

“Contrary to Gulak’s claims, we did not receive any court document striking out the stay of execution. As a matter of fact, the court did not sit to hear the application, let alone strike out the matter.

“Besides, we have an appeal against the judgment pending before the Court of Appeal. The truth is that Section 47(6) of our party constitution did not prescribe time limit for the tenure of an Acting Chairman,” Kwom said.

According to him, Gulak’s action constituted anti-party activity because the various organs of the party were still in consultation, with a view to picking an agreeable person as national chairman.

On why it took the PDP this long to appoint a replacement from the Northeast zone since Mu’azu’s resignation in May, last year, Kwom said the party had been bugged down by a series of time consuming activities.

He cited the recent governorship primary elections and elections proper in Kogi and Bayelsa states as events that delayed the appointment of a substantive national chairman.

He said the various party organs had already directed the six states in the Northeast to come up with three candidates from which the party would choose one as national chairman.

“We have initiated that move and we are about finanlising the process through which a new chairman of Northeastern extraction is expected to emerge after due consultations among the six states in the Northeast.

“The appointment will be made very soon and if Gulak is interested in the position, let him get the endorsement of the various organs and caucuses of the party because the court did not proclaim him the national chairman,” Kwom added.