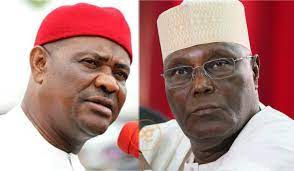 The People’s Democratic Party (PDP) has expressed optimism in the reconciliation talks between the presidential candidate of the Peoples Democratic Party (PDP), Alhaji Atiku Abubakar, and the embattled governor of Rivers State, Nyesom Wike, towards resolving their feud over the choice of Governor Ifeanyi Okowa as running mate for the 2023 poll.

The meeting which began Thursday in Abuja was facilitated by a former Minister of Information, Professor Jerry Gana, at his residence in Asokoro part of the federal capital and the discussion was conducted under a congenial atmosphere for more than an hour. It was, however, gathered that Atiku and Wike agreed in principle to set aside all their political differences and work in unison to guarantee PDP victory in 2023 the general election.

To underscore their commitment to the talks and all the issues discussed, they also agreed to set up a committee that would comprise equal representation from each camp to work out the modalities ostensibly on power sharing to be submitted to an enlarged body of PDP for ratification.

The source said the meeting marked the takeoff point in their rapprochement as they expressed commitments to working together for the success of the PDP at the election.

The source declared: “Atiku and Wike met today at the Abuja residence of Professor Jerry Gana, who facilitated the meeting.

“The atmosphere was cordial and both parties agreed to resolve whatever disagreement that exists between them.

“They both elected to select representatives of equal number to constitute members of a committee that will iron out issues and present to the larger body of the party for ratification.

“It is the takeoff point but there are commitments from both sides to working together for the success of the PDP in the upcoming election.

“The meeting was cordial and it was a good sign, it was a face-to-face to signal the new direction.”

Both men will continue their talk and agree on when the committee will commence its meeting on their behalf after being furnished with their terms of reference.

On the significance of the meeting between the two feuding party men, the source stated: “It’s the best shot we have had, without intermediaries but just them. It’s a good sign.

“If the PDP is expected to wrest power from the APC, they have to do that as a united front. That they are even meeting face-to-face now is the beginning of the end of the resolution of the issues.”

Thursday’s meeting hosted by Gana came about 66 days after a keenly contested presidential primary held at the national stadium in Abuja, in which Atiku won by 371 votes as against 237 votes polled by Wike.

While Wike was still smarting from the loss of the PDP ticket, the choice of the governor of Delta State, Dr Ifeanyi Okowa by Atiku as his running mate triggered another twist to the cold war with Wike and some governors sympathetic to his course expressing anger.

They claimed that Wike was shortchanged in the choice of running mate because his name topped the list of three names forwarded by a committee saddled with advising Atiku on the choice.

But Atiku had said hinged his choice on competence and capacity and a man that could stand in as president incase the need be in the future.

According to the former vice president, in his consultations with PDP stalwarts, he had made it clear that his “running mate would have the potential to succeed him at a moment’s notice, that is, a president in waiting.”

To douse the tension that trailed the choice, the chairman of the Board of Trustees (BoT) of the party, Senator Wakil Jibril had announced the setting up of a high-powered committee to appease Wike. But the body could not fully take off as the candidate went on a foreign trip shortly after the conclusion of the presidential primary.