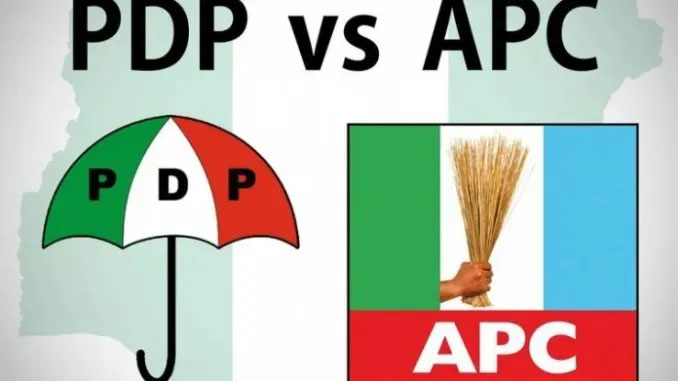 The Atiku-Okowa Presidential Campaign of the Peoples Democratic Party, PDP, has commenced court proceedings to disqualify the presidential candidate of the All Progressives Congress, APC, Asiwaju Bola Tinubu, over criminal conviction and sentencing by a court of competent jurisdiction in the United States over trafficking in narcotics.

However, APC PCC immediately countered the PDP, saying the party did not only lack originality but was also a copycat.

But PDP’s move is a counter to the APC which on January 20, approached the courts to disqualify Alhaji Atiku Abubakar of the PDP from the presidential poll over what it termed as #Atiku-Gate and Special Purpose Vehicle, SPV, saga.

Yesterday, the PDP insisted that the conviction of Tinubu for a criminal offence by a court of competent jurisdiction in the United States of America rendered him ineligible to contest any election.

The spokesman of the Campaign, Kola Ologbondiyan, said this at a media briefing in Abuja yesterday.

Ologbondiyan said the decision of a court in Chicago, which led to Tinubu forfeiting $460,000 in funds believed to be proceeds of crime, specifically, the sale and distribution of narcotics renders his nomination null and void.

He said: “Nigerians are not unaware of the criminal matter concerning the Presidential Candidate of the All Progressives Congress (APC), Asiwaju Bola Ahmed Tinubu, in respect of his criminal conviction and sentencing by a court of competent jurisdiction in the United States over a criminal case of trafficking in narcotics for which Tinubu forfeited the sum of $460,000 to the state.

“For the avoidance of doubt, the United States court in sentencing Asiwaju Tinubu ordered ‘that the funds in the amount of $460,000 in account 263226700 held by First Heritage Bank in the name of Bola Tinubu represent proceeds of narcotics trafficking or were involved in financial transactions in violation of 18 U.S.C. S1956 and 1957 and therefore these funds are forfeited to the United States pursuant to 21 U.S.C. S881(a)(6) and 18 U.S.C S981.’

“From the declaration of the court and the sentencing, it is clear that Asiwaju Tinubu was summarily convicted by the court, he took no step to challenge the judgment but acceded to the forfeiture of the $460,000 found to be the proceeds of narcotics trafficking.”

The PDP campaign Spokesman noted that it is an established fact that trafficking in narcotics is an international crime which all nations are obligated by international conventions and statutes to arrest, prosecute and implement any court judgment imposed on offenders anywhere in the world, as well as the consequential effects of such judgments.

Tinubu convicted in US, can’t stand for poll in Nigeria

He further said: “Having been convicted and having acceded to be guilty as charged by way of forfeiture of the $460,000, Nigeria is a signatory to International Convention is mandatorily obligated to execute the consequential effect of that conviction by virtue of Section 137 (1) (d) of the 1999 Constitution (as amended).

He explained that the import of the constitutional provision was that having been so convicted and fined and having acceded to the sentencing by way of forfeiture of $460,000 and have not received any state pardon or acquitted by any court of competent jurisdiction, “Tinubu remains a convict and the consequential effect is that he cannot contest the election at any level in Nigeria.”

The PDP Campaign equally said: “The effect is that the listing of the name of Bola Tinubu, who stands convicted by a court of competent jurisdiction on the ballot for the 2023 presidential election is by the virtue of Section 137 (1) (d) of the 1999 Constitution (as amended) fundamentally illegal, invalid and must be expunged immediately.”

We’ve approached the courts to disqualify him

Ologbondiyan also revealed that the PDP has approached the courts to seek Tinubu’s disqualification.

He said: “Our Campaign has proceeded to the court demanding the court to:

“Declare Asiwaju Bola Ahmed Tinubu, the Presidential Candidate of the APC, having been convicted, as ineligible to contest the Presidential election by virtue of section 137 (1) (d) of the 1999 Constitution (as amended).

“Compel the Independent National Electoral Commission, INEC, to immediately delist Asiwaju Tinubu as Presidential candidate of the APC or any other political party for that matter and expunge his name from all materials and documents related to the 2023 Presidential election.”

According to him, the PDP campaign is also filing for an accelerated hearing in order to save the nation from an impending catastrophe.

He said: “This case is in the interest of the nation as our laws do not permit a convict, let alone an individual convicted on account of the international crime of trafficking in narcotic, to stand election at any level.

“Nigeria cannot afford the embarrassment of having a convict hold office at any level against our laws.”

His words: “Why did they wait all these months until we filed before they are now rushing to court? I challenged them more than two months ago, yet they did nothing.

‘’It shows a team that is lacking in originality, lacking in ideas and lacking in vision. It is just an attempt to create a counter-suit to our own.

‘’This is so laughable that Nigerians are beginning to see that these are remorseless people; leopards that cannot change their skin; instead of Atiku facing the cameras, shed some tears and apologise to the nation for abusing his office as VP with SPVs, his reply, in summary, is, ‘what-about-you-too?’ This is disastrously sad”

Also, reacting, Mr Bayo Onanuga, director, Media and Publicity of the APC PCC, restated his statement of January 18, 2023 where he pooh-poohed PDP’s “shameless skirting of issues” using the attack as a defence.

He challenged Atiku to address the issues of whether or he employed the whistleblower, Michael Achimugu, who swore to an oath; whether Atiku made a scandalous conservation on how he and former President Olusegun Obasanjo set up SPVs, such as Marine Float to steal public money; and whether the taped voice was Atiku’s.