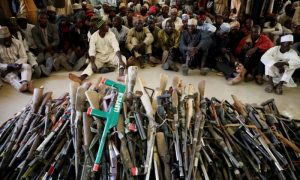 THERE are 120 terrorist camps that are in possession of 60, 000 AK-47 rifles in six Northern states of the country. The states are Zamfara, Sokoto, Katsina, Kaduna, Kebbi and Niger and each of the 120 terror groups possesses more than 500 AK-47 rifles.

These revelations were contained in the findings of a decade-long study undertaken by a senior lecturer in the Department of History, Usmanu Danfodiyo University, Sokoto, Dr Murtala A. Rufa’i.

The don, who traced terrorist activities from 2011, also said over 12,000 lives have been lost to terrorism in Zamfara State alone.

He also disclosed that about 250,000 livestock had been rustled, while 120 villages were destroyed and over 50, 000 villagers displaced by terrorists in the period under review.

He spoke at a public lecture organised by the university as part of seminar series on banditry in the North-West zone.

Presenting a paper entitled, “I am a Bandit: A Decade of Research in Zamfara Bandits’ Den”, Rufa’i said he had a one-to-one interaction with some of the leaders of the terror groups.

According to him, these gangs of bandits basically engage in the mass killings of innocent people, cattle rustling, kidnapping, gender-based and sexual violence and other related human rights abuses.

“At the beginning, they lived in the woods and mountainous areas from where they unleashed terror on the rural and urban areas in the states. But some of the bandits have become very daring to the extent of operating from their respective villages,” he said.

According to him, “powerful camps and gangs like the one headed by Dan-Karami of Zurmi, Alhaji Auta of Birnin Magaji, Halilu of Chafe, Turji of Isa and Dogo Gide of Birnin Gwari have the financial capacity and connections to procure a large number of weapons,” Rufai revealed in his seminar research, detailing how the bandits have since metamorphosed into terror groups.