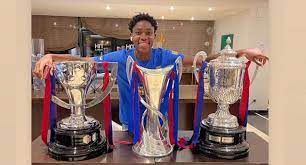 Super Falcons forward, Asisat Oshoala, has picked up the top scorer award for the Barcellona Fermeni side with a goal tally of 20.

Oshoala also became the first African woman to win the highest goal-scorer gong in the Spanish Primera Division since it began in 2011.

She was also instrumental in guiding her Barcelona team to history as the first team in Spanish football history to win the league title with a perfect record. 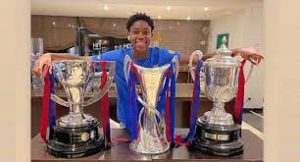 The Spanish champions finished the season with 30 wins in 30 matches, with 159 goals scored and just 11 conceded.

Despite her impressive tally, the 27-year-old was unable to increase her number of goals after being introduced in the 63rd minute for Jenifer Hermoso in the match against Atletico Madrid On Sunday.

The Nigerian captain was the highest goal scorer at the 2014 FIFA U-20 Women’s World Cup and was named the best player at the tournament.

She was also named best player and second top goalscorer with the Super Falcons team who won the 2014 African Women’s Championship.

In September 2014, Oshoala was made a Member of the Order of the Niger by President of Nigeria Goodluck Jonathan. In 2021, she was named in the Forbes 30 Under 30.