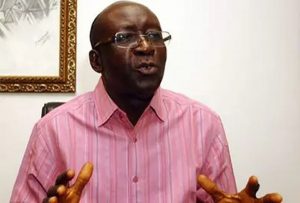 FIVE Peoples Democratic Party aspirants in the 2022 Ekiti State governorship election have rejected Saturday’s ward congress to elect three ad hoc delegates in each of the 177 wards in the state, saying the process was hijacked.

They accused the congress committee appointed by the party’s National Working Committee, chaired by Akwa Ibom State Governor, Udom Emmanuel, of not following due process.

According to them, the results of the exercise which ought to hold across the different wards were fabricated and recorded at a hotel in the Fajuyi area of the state.

There was tension at Koltotel hotel located at GRA in Ado Ekiti, where the committee members from Abuja resided as party members besieged the hotel, alleging that the congress was teleguided by a former governor of the state.

There was heavy deployment of policemen, men of the Department of State Services and Nigerian Security and Civil Defence Corps in the area to prevent the breakdown of law and order.

Oni, who expressed regrets that the election materials sent to the 177 wards were allegedly hijacked, described the situation as worrisome, saying, “What you have seen today is laughable. This is the standard we still are as a country. It is very unfortunate.

“There is nothing we can do other than to complain formally. We have complained to the acting chairman of the ward congress panel. I believe we cannot have a genuine democracy this way. If anybody is a ‘muscle man’, he should apply that to winning people for the party.

“We would believe the party will take a look at what has happened. At least, we all spoke on our honour and if they want us to say more they can contact us.  Each of us is a known face to even the people in Abuja. This is very unfortunate, but we hope the party will find a way out of it.”

Speaking on the ongoing efforts by the national headquarters of the party to reconcile members in Ekiti PDP, the former governor said, “Before, we were getting it right; we were talking across all divides and we believed we would end up being together. But what happened today has shown that there is a big problem.

“Let me sound it that we politicians are testing the will of the people too much. If anybody claims to be a ‘muscle man’ who can wrestle the process out of the grip of the people, let him wait for them. And I believe they will wait for him at an appropriate corner. We must all join hands to rescue this country from this type of politics,” Oni added.

Olujimi described the exercise as “a repeat performance of the 2020 congresses. This was how it was on March 7, 2020. That is what we have been fighting for on till now. And it has repeated itself. Everything was hijacked and everybody had been compromised,” she alleged.

In his remark, Aribisala said, “There was no election. The team from Abuja had been compromised and we are not going to accept this. They are writing results at NTS Hotel, Fajuyi, Ado Ekiti. If you think you are popular, things should be done right. There is no three ad hoc congress in Ekiti State as we speak”.

However, the Secretary of the PDP Ward Congresses Committee,  Mr Kola Ologbondiyan, who said the committee discharged its assignment appropriately, appealed to aspirants who might have any complaints to wait for the appeal committee.

Ologbondiyan said, “As far as we are concerned, we have done the first leg of our responsibility; the second leg is to collate the results and no results have been submitted to us as at this moment, people are still conducting the congress.

“If there are complaints arising from the conduct of the congress, the aspirants will have to wait for the appeal committee which will come after this committee to file their petitions.”