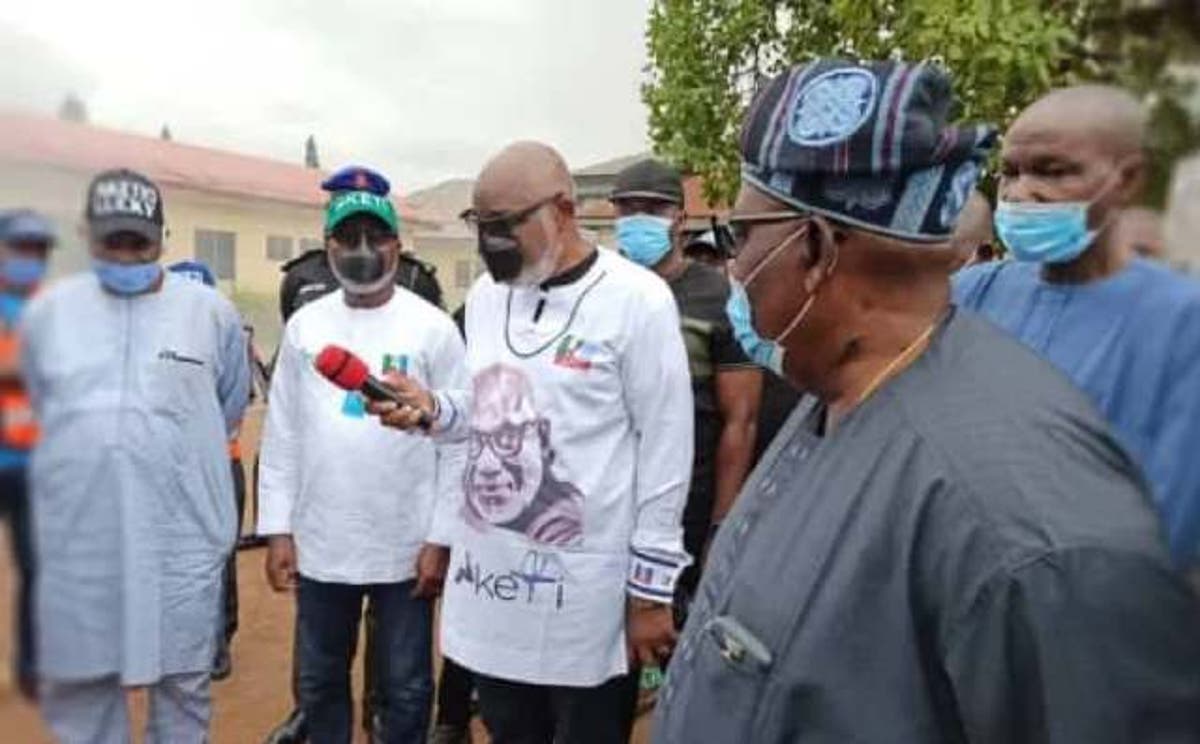 Allegations of foul play to rig are balderdash — REC

Governor Rotimi Akeredolu of Ondo State on Friday visited the state headquarters of the Independent National Electoral Commission (INEC) gutted by fire and described the incident as unfortunate and shocking.

The fire incident, which gutted the office at about 8:30pm, burnt over 5114 card readers meant for the October 10 governorship election in the state. Akeredolu, who paid an unscheduled visit to the Alagbaka office of the commission in Akure, said it was not only an unfortunate incident but equally shocking, especially when the governorship election in the state is at the corner.

He charged the commission to unravel the cause of the fire incident. The governor however commended the determination of the commission to still conduct the forthcoming governorship election despite the ugly incident and assured that the state government would be ready to render assistance to the commission in any area where it would not be termed as being partisan.

Governor Akeredolu said: “As you promised us that by the grace of God the election will still be held on that day, that is soothing, but it will be at a great cost to INEC because for you to replace all those card readers, it would be at great cost. We sympathise with you and we want INEC to know that the people of this state are really concerned and are with you at this point in time in this calamitous situation.

“We are with you and whatever you think we can do that will not be termed as being partisan because whatever we do now could be misinterpreted since we are in an election period, but no doubt we have to come as government and not as contestants

“I can see the determination from how you spoke that the election will still hold on the 10th of October, we are so sorry about this” He noted that the fire must have been very serious following offensive smokes emanating from the scene at sixteen hours thereafter.”

Meanwhile, the Resident Electoral Commissioner, Ambassador Rufus Akeju while addressing a press conference in Akure, denied that the fire incident was a ploy to collude with any political party to rig the election. Akeju said the allegation was baseless and unfortunate. According to him, the fire incident started “between 7.15 pm and 7.30 pm when most of the Commission staff had gone home. The fire incident actually affected the Smart Card Readers Store. In all, 5,141 Card Readers that were inside the Metal compartment (Store) when the fire erupted were completely destroyed”.
“Up till now, the actual cause of the fire is unknown but relevant security agencies have commenced an investigation and you will be further briefed as events unfold. Let me use this medium to allay the fears of the electorate, political parties and our stakeholders and the good people of Ondo State that the fire incident will not affect the conduct of the forthcoming Gubernatorial Election in Ondo State in any form, neither will it lead to the postponement of the Election,” the REC said.

The All Progressives Congress (APC) in the state through its Publicity Secretary Alex Kalejaye said it was taken aback over the fire incident at the state INEC office. Kalejaye in the statement said: “Although, fire incident could happen at any time, yet the party is more concerned that the unfortunate occurrence happened a few weeks to the gubernatorial election.
“While the party declines to join the pontificating wagon to condemn and apportion blame on the unfortunate development, we believe strongly that the gravity of what has happened demands prompt action from the security agencies to immediately unravel what actually transpired, to forestall a recurrence.
“The chapter also calls on the national headquarters of INEC to do all it could to ensure the incident does not result in setbacks in its preparation for the governorship election in October.