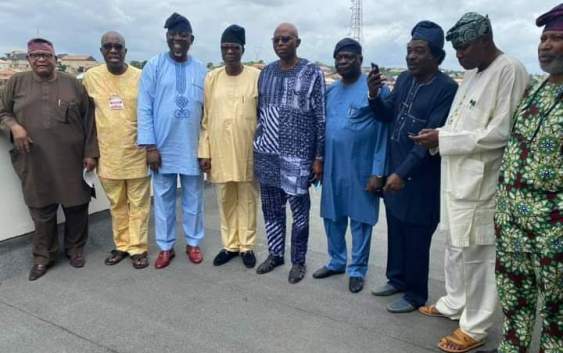 Consequently, he invited the immediate past governor Dr Olusegun Mimiko to his Hilltop country home in Abeokuta, the Ogun state capital to discuss political happenings ahead of the poll. Sources close to the former governor said that the meeting took place yesterday and the Ondo forthcoming election was discussed amongst other pressing national issues.

The meeting vanguard learnt was attended by other political leaders across the South West zone including two former governors, Olagunsoye Oyinlola, Osun and his Ogun counterpart, Gbenga Daniel

” The former President invited Mimiko following feelers he had received on the forthcoming election in Ondo state.

” President Obasanjo may ask Mimiko to allow the candidate of the PDP, Eyitayo Jegede to collapse his structure into that of the Zenith Labour Party which Mimiko is the national leader.

Vanguard gathered that the non-committal attitude of other governors on the platform of the PDP to the candidature of Jegede may have warranted the intervention of Chief Obasanjo.

Recall that only the Oyo state governor, Seyi Makinde and his counterpart from Sokoto state Aminu Tambuwal attended the Flag off rally of Jegede while other governors failed to attend.

Jegede choice of deputy despite criticism across the party was said to be a major factor for the displeasure within the party.

Many of the governorship aspirants that contested the primary with him are standing aloof because he jettisoned all appeal to pick his deputy amongst them.

The ongoing talks on alignments and realignments have seen many chieftains of both the APC and PDP in the state defecting to the ZLP to shore up support for its candidate Agboola Ajayi within the last few weeks.

Sources said that the dwindling fortune of the PDP may have warranted the intervention of the former President.

A source said that “Agboola’s increasing bloc popularity in Ondo South senatorial District, and Mimiko’s grip of the central portends that the PDP’s fate was sealed and instead of losing out totally, it was better Jegede collapsed his structure for Agboola and join forces with him to unseat Akeredolu who has also lost the confidence of the masses and his close allies in the APC.

“The feelers from the field for the PDP is not a good one. Apart from Akure where Jegede hails from, he cannot claim to hold sway in any other local government.  Even Akure has been largely polarised among the three major parties. The only two PDP House of Assembly members are working for Agboola, ditto for all his co-contestants in the primaries and party chieftains who are working underneath for the ZLP,” the source revealed.

” We fear that with zoning arrangements not favourable to Jegede, a factor that contributed to his loss in 2016 and the underground support most PDP governors are giving Agboola, Jegede’s chances of winning the election gets dimmer.

“Ajayi is the only candidate from the south, a region whose clamour is nothing but a governor having spent just 6 years under late Olusegun Agagu.

“Jegede is from the central which enjoyed 8 years under Mimiko and the north has spent a cumulative 12 years under Adekunle Ajasin, Adebayo Adefarati and the incumbent, Rotimi Akeredolu.”

Contacted, the Head, Media Research of Eyitayo Jegede Campaign Organisation, Kayode Fasua said that his principal was not contemplating collapsing his structure into any political party.

Fasua said it is not true that Eyitayo Jegede SAN wants to collapse his structure into any other political party.

” lnfact he’s not even contemplating such. This is because he is sure of winning the October 10 governorship election.

” Eyitayo Jegede is the candidate to beat in the coming election. So forget all these talks about him collapsing his structure.