In what many have described as a great upset to the American government, a US judge on Monday ruled to overturn the long-running mask mandate and airlines & passengers responded swiftly.

It was announced yesterday that a federal judge has sensationally overturned the US mask mandate, voiding the recent US Centers for Disease Control and Prevention extension. On Monday, US District Judge Kathryn Kimball Micelle said the mandate was unlawful because it violated administrative law and exceeded the statutory authority of the CDC. As a result, the White House has confirmed the mask mandate is no longer in effect. 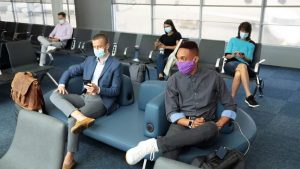 An Idaho-based NGO called Health Freedom Defense Fund filed a lawsuit against the mask mandate last year, arguing it was unlawful and violated the Administrative Procedures Act (APA). Monday’s ruling was a response to that lawsuit. The mask mandate came into effect early last year after US President Joe Biden assumed office. It required people aged two years and above to wear a face mask at all times while using public transport and related infrastructure across the country (such as airports). Last week, despite some expectations the mandate would end, the CDC extended it until May 3.

“The mask mandate exceeds CDC’s statutory authority and violates the APA. “Because our system does not permit agencies to act unlawfully even in pursuit of desirable ends, the Court declares it unlawful and vacates the mask mandate.”

Already, in significant aviation news, airlines are responding to the changes. “Effective immediately, all Alaska Airlines and Horizon Air guests and employees have the option to wear a mask while traveling in the U.S. and at work,” says a statement on the Alaska Airlines website.

“Masks are no longer required on domestic flights, select international flights (dependent upon the arrival country’s requirements) or at US airports. More comfortable keeping yours on? Go right ahead – the choice is yours,” advises United Airlines.

“Effective immediately, masks are optional for all airport employees, crew members and customers inside US airports and on board all aircraft domestically, as well as on most international flights,” says Delta Air Lines in a statement released on Monday evening.

“Face masks will no longer be required for our customers and team members at US airports and on domestic flights. Please note face masks may still be required based on local ordinances, or when traveling to/from certain international locations based on country requirements,” a statement from American Airlines reads.

“Southwest Employees and Customers will be able to choose whether they would like to wear a mask, and we encourage individuals to make the best decision to support their personal wellbeing,” says a statement from that airline.

“Unelected officials cannot do whatever they like to our personal freedoms just because they claim good motives and a desirable goal,” said the Health Freedom Defense Fund after Monday’s win. “There are laws that set boundaries for federal agencies to protect individual freedom and the Court clearly found that CDC exceeded those limits.”

Meanwhile, the White House spokesperson says agencies are reviewing the decision and assessing potential next steps.