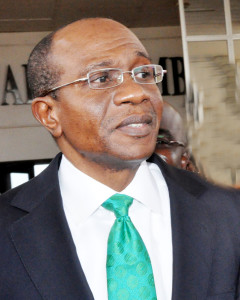 The Central Bank of Nigeria (CBN) in collaboration with the Bankers Committee have decided that Banks will increase lending to the agricultural sector by N300 billion in 2016.This was made known by the Central Bank Governor, Mr. Godwin Emefiele, at the end of the 7th annual retreat of the Committee in Lagos.

The committee however stressed the need for provision of infrastructure necessary to enhance supply of agricultural products in the country.

Emefiele said, “Banks generally agreed to increase lending to the agricultural sector, but the committee feels that there is the need to de-risk the agricultural value chain. The bankers’ committee also feels that the monetary and fiscal authorities need to work together in a collaborative manner to achieve the objective of improving local production of specific agricultural products, so that as a result of lending to this sector, we can begin to see a reduction in the demand for foreign exchange that would help to conserve our foreign exchange reserves and strengthen our currency.

“Banks feel that there is a need to improve the level of infrastructure in various sectors. For instance, build more Fadama roads, build more silos and warehouses to receive final produce, so that products don’t get destroyed at the farm.

“We should have Fadama roads which makes it easy for goods to be transported from the local communities to areas where they could be sold to increase the wealth of those in our local communities.

“Banks therefore set a target to boost agricultural lending not only to the small and medium enterprises, but also to large scale farming and companies to up to N300 billion in 2016.”

Emefiele also stated the committee’s resolve to evolve measures to support  small and medium enterprises in the country as well as boost employment.

He said, ” Banks also looked at financing SMEs. The recognized that there is a need for a paradigm shift in the feeling that SMEs are in an endangered sector. Banks recognized that the BVN would assist in creating a pool of SME loans in the country. We however agreed that there is a need to take identified SMEs through capacity building in skills in record keeping and how to run their business. This, we believe would make the SMEs more bankable.

“Banks agreed to support all efforts of government to boost employment of young graduates in the country. Of course in the area of infrastructure, banks identified power, roads, as strong enablers and drivers of growth in the country.

“Banks agreed to play their part in supporting power and financing of other infrastructure, but that all hands should be on deck, not just from the monetary authorities, but also from the fiscal authorities, to boost power, transportation so that we can achieve the goal of growing the number of graduates.

The CBN Governor also highlighted how the bankers’ committee has increased lending to key sectors of the economy like the manufacturing, power and aviation sectors