As part of strengthening and enhancing security in the West African sub-region, the Nigerian Army has deployed 173 officers and soldiers to Guinea Bissau on an ECOWAS peacekeeping Operation.

This may be shocking to many people, especially considering that Nigeria itself is burning with cases of uncontrolled insecurity here and there, which threaten the unity and corporate existence of the country. 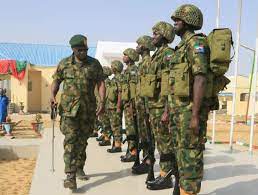 The Chief of Operations, Army Headquarters, Major General Oluwafemi Akinjobi, announced this on Thursday at the graduation and pre-deployment training of the troops from the Martin Luther Agwai Peacekeeping Centre in Jaji Kaduna State.

The graduation comes ahead of their departure to Bissau, the Guinea Bissau capital as they are expected to leave Nigeria immediately after their induction.

While addressing the troops, the Chief of Operations, represented by Major General Zakari Abubakar, warned the contingent to abide by the rules of engagement, exhibit braveness as professionals, and also respect the cultural sensitivity of the people of Guinea Bissau.

“Nigeria remains the beacon of peace and gatekeeper of the ECOWAS sub-region. Consequently, the Federal Government of Nigeria is committed to the deployment of a contingent to maintain peace in the Republic of Guinea Bissau,” he said.

“The history of peacekeeping in Africa cannot be written without the commitment and sacrifices of Nigeria. The first contingent of Nigerian peacekeepers was deployed to Congo in 1960 shortly after our independence.

“Since then, Nigeria has contributed over 100,000 peacekeepers in over 40 peacekeeping missions in Africa and across the globe. I must say with pride that our peacekeepers have had to restore peace in many conflict areas around the globe which has earned Nigeria many national and individual commendations from several nations.”

Abubakar reminded the soldiers of the United Nations’ zero tolerance for drug trafficking and human rights abuse. He also asked them to avoid indecent characters capable of tarnishing the image of the Nigerian Army and the nation in general.

In his remarks, the Commandant of the Martin Luther Agwai Peacekeeping Centre, Major General Auwal Fagge, also highlighted the importance of the pre-deployment training.

He said the training is in line with the Nigerian Army Headquarters’ desire to ensure that troops receive the needed robust and theatre-specific pre-deployment training prior to their induction into peacekeeping missions.

Fagge expressed confidence that the high level of enthusiasm and cohesion exhibited by the soldiers and officers will reflect on their operational conduct abroad.