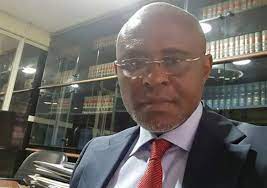 By all indications, the Nigerian state has fallen into utter chaos. The situation is further compounded by the incumbency of an enfeebled ruler who is obviously incapable of maintaining order. Still, it is my view that the resort to arms struggle by IPOB against the Nigerian state at this time would be a tragic miscalculation. The Nigerian state still retains the resilience to successfully resist secession by the Southeast, and it is doubtful whether the IPOB can muster sufficient gravitas to successfully overawe the Nigerian State, as presently poised.

To start with, secession by the Southeast will immediately embolden the Southsouth, a strategic resource bearing region, to attempt likewise. Since the Nigerian state is perpetually nectared to the hydrocarbon resources of the Southsouth, it is expected therefore that resistance by the Nigerian state to the bid for secession by the Southeast will be very fierce and unyielding. The ensuing maelstrom is capable of resulting in a devastation of the region, and a further isolation and marginalization of its people, in the event of military defeat.

No other leader, not even in the immediate post – war era had been that brazen. Buhari’s style was a shocking departure from the cosmopolitan egalitarianism of President Yar ‘Adua, and the enlightened pragmatism of Premier Ahmadu Bello, two departed Fulanis whose leadership enthroned cohesion and synergy in multi religious and multi tribal Nigerian societies in two distinct eras.

Opposition to this flagrant mismanagement of the nation’s diversity was initially muted, with many from across the political divide preferring to give the new leadership the benefit of the doubt, and a chance to govern. But it soon became clear that the President was becoming increasingly imperious and insensitive. He justified his brazen exclusion of the Southeast zone from the loop of governance on the ground that the zone gave him only 5% of their votes, despite having a brigade of diehard and highly qualified supporters from the zone.

President Buhari’s governing coalition was made possible by the political astuteness of the Southwest political grandee, Bola Tinubu. Tinubu’s vision and inventiveness proved to be the nemesis of President Goodluck Jonathan, and paved the way for Buhari’s emergence as President in 2015. The underpinning quid pro quo of this coalition was the understanding that power will return to the Southwest, with Tinubu as putative successor, after eight years of President Buhari’s stewardship.

Ironically, it is this political desideratum that the President has manipulated to perpetuate his sectional misrule. The allure of a possible return to power in 2023 by the Southwest, with Tinubu as Buhari’s successor, sedated an otherwise sophisticated and critical region and made both the region and Tinubu himself apparently obtuse to Buhari’s indirection. From a strategic point of view, and having regard to the way Nigeria is configured, as long as this coalition remained intact, it was going to be clearly impossible for the Southeast to impose its will politically, or defeat the Nigerian state militarily! After all, it was the same decisive rapprochement between the North and the same Southwest that effectively torpedoed the old Biafra, and dimmed the rays of the rising Sun!

Buhari’s brazen mismanagement of the nation’s ethnic and religious diversity has unfortunately roused the other ethnic nationalities against the Fulani tribe. The most notable consequence of the lopsided security architecture was the triggering of the conquering impulse of the Fulani. Hordes of Fulani fighters, both local and foreign, sensing a subtle shift in momentum and relative tactical advantage, immediately took to arms, and embarked upon a southward drift to distant clans and forests, and unleashing an unchecked orgy of murder, rape, kidnappings and other depredations. Across the nation, cultivated farmlands were laid waste by Fulani cattle, and whole villages came to be sacked in waves of unbridled Fulani savagery. After ravaging the Benue valley, these invaders soon cast their eyes both westwards and eastwards, towards the lands of the Yoruba, Igbo and other clans, leaving death, misery and wailing in their wake.

Wherever they went, their presence fuelled deep resentment. Natives were left wondering whether these were not the same placid and genial Fulanis with whom they had peacefully co – existed and traded over the millennia. Across the states, and in consequence of the herdsmen rapacity, laws were quickly passed by the many southern and North – central states legislatures banning open grazing of cattle. Ethnic militia, designed to curtail what was beginning to be seen as an audacious bid for land grab by the Fulani, began to sprout, as resentment against the Fulani grew alarmingly across the South and the North Central. Amotekun was formed in the Southwest, and amid seeming inaction by the Governors of the Southeast, IPOB launched the Eastern Security Network, with the ostensible mandate of halting the Fulani advance. In various theatres across both the Southwest and Southeast, resentment against the Fulani has snowballed into violence, resulting in the loss of lives and property.

Ironically therefore, what was probably designed as the high point of Fulani exceptionalism is translating into the turning point of its civilization, and might set the nation aflame, if care is not taken.The herdsmen depredation, along with other emerging signs that President Buhari might not after all honour his obligation to handover power to the Southwest, is bound to sorely test and strain the present governing alliance between the North and Southwest, with profound consequences for the unity and future of our nation.

For those of us in the Southeast desirous of a change, it is important to read the unfolding events critically, and not take precipitate action. Buhari’s ambivalence to a Southwestern succession will be rooted in the fear that the Southwest’s inherent egalitarian streak will inevitably result in a dismantling of acquired privileges, and a drastic restructuring of the Nigerian State, an idea the core North still finds unpalatable. The North may therefore be tempted, in order to overreach that probability, decide to cling to power. That will immediately inflame passions in the Southwest, leave the APC governing alliance in tatters, embolden latent separatist tendencies in the Southwest, and render Nigeria irredeemably unstable. Should that happen therefore, Nigeria is likely to implode, and no amount of military force can save it!

It is only in such a resulting state of flux that the birth of a Biafran state can be feasible. For though almost all empires were created by force, none can be sustained by it. The wise ruler, to last, must find a way of translating force into obligation. Otherwise, his energy will be exhausted in maintaining dominance at the expense of his ability to shape the future. Empires persist only if repression gives way to consensus.

If the Southwest returns to rancorous opposition mode, and Nigeria remains unrestructured, it will be impossible for Buhari’s northern successor to translate force to obligation, or to muster consensus to govern a post 2023 Nigeria. If however President Buhari suddenly acquires sufficient statesmanship and reads these strategic signs correctly and hands over power to the Southwest, it is a prospect that the Southeast, and the rest of Nigeria, can live with it. For, constructively engaged and prodded, the instinctive moorings of the Southwest, and the emerging realities of a post oil world, will compel such a leader to restructure Nigeria along the lines of justice and equity and the overarching imperatives of drastically reducing the cost of governance.

I have deliberately left out the Southeast and the Southsouth from the presidential succession loop. For one, the part of the Southsouth that was in the old Midwestern Region will naturally find contentment in a Southwest Presidency. For both the Southeast and the other parts of the Southsouth hitherto belonging to the old Eastern Region, the obvious reality is that the old Eastern Region was balkanized, and divisions contrived to defrock those parts of political force and potency. Until they are able to overcome their artificial differences and find accommodation once more, the now balkanized Eastern Region, along with the Anioma part of Delta State, will continue to exist on the political margins.

As it stands now, therefore, the only options realistically open to Nigeria are to restructure, or burst!