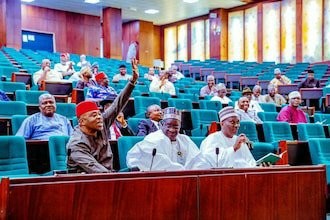 President Muhammadu Buhari had in October presented the bill before a joint session of the National Assembly. Both the Senate and the House of Representatives Committees on Appropriations had laid a harmonised report in the respective chambers as the National Assembly held special sessions mainly to pass the national budget ahead of the Christmas and New Year break.

Out of the total sum of N13.59tn approved, N496.53bn is for statutory transfers; N3.32tn is for debt service; N5.64tn is for recurrent (non-debt) expenditure; while the sum of N4.13tn is for capital expenditure.

While statutory transfers totalling N496.53bn were approved, it was observed that the N125bn proposed for the National Assembly and its affiliates had been raised by N8.99bn, putting the new total estimates at N133.99bn.

The National Assembly also authorised the Economic and Financial Crimes Commission and the Nigerian Financial Intelligent Unit to “charge and defray from all monies standing in credit to the units as revenues or penalties or sanctions at 10 per cent for technical setup and operational cost at the units in this financial year.”

The Chairman of the Senate Committee on Appropriations, Jibrin Barau; and his House counterpart, Aliyu Betara, in the report they separately read, said the budget deficit was N5.19tn; Gross Domestic Product growth rate, three per cent; oil benchmark, $40 per barrel; crude oil production, 1.86 million barrels per day; and exchange rate, N379 to $1.

The report also said the committee, while processing the 2021 Appropriation Bill, noted that, “The impact of COVID-19 pandemic has negatively affected virtually every aspect of life, businesses, individuals and government, especially the revenue accruals to the government.

“There is a remarkable increase in Nigeria’s oil price, which is hovering between $47 and $50 per barrel in the international market. This is above the benchmark price of $40 per barrel approved by the National Assembly.”

The committee said in view of the increasing global oil prices beyond the benchmark of $40, the executive might wish to submit a supplementary appropriation bill in order to fund critical areas that would accelerate movement of the economy out of its current recession.