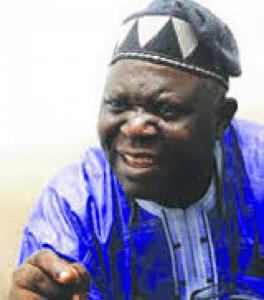 National Democratic Coalition (NADECO) on Friday demanded that President Muhammadu should stop his sectional assault on the South and the Middle Belt peoples of the country who have decided to take back their rights to self-determination, saying it was outrageous, unfortunate, unacceptable and unbecoming for a Nigerian president to be threatening other sections of the country with dire consequences as was unleashed during the Nigerian Civil War of 1967-1970.

The group, which was actively involved in the June 12 struggle and the country’s return to democracy, gave the caution in Lagos at a symposium organised by it to mark the 22 years of democracy, and attended by Hon. Wale Oshun, Col. Tony Nyiam (rtd), Mr Ayo Opadokun, Dr Amos Akingba, Dr Fred Agbeyegbe, Comrade Lynus Okoroji, Comrade Ekujumi, Tessy Irsboh, Sammanta Kanu, Jumoke Anifowose, among others.

This was just as the pro-democracy group, in its communiqué, threw its total support for the Asaba Declaration by the 17 Southern governors, which called for true Federalism and total ban on open grazing, a declaration which it said Southern members of the Senate and the House of Representatives had since endorsed.

NADECO said there was no reason why Buhari should be threatening the people of Southern and Middle-Belt of the country since the 12 Northern states introduced Shariah Laws in 2001 against Sections 1 and 10 of the disputed 1999 Constitution and had implemented such to the detriment of most Nigerians without any repercussion.

The group reiterated its call for restructuring of the country while frowning at President Buhari’s rejection of all appeals to convey a Conference of Ethnic Nationalities, amid poor governance, several killings and failure to address the problem, among others, saying it had resolved to write him an open letter that would be copied to the Secretary-General of the United Nations Organization, (UNO), the Security Council of the UNO, the United States president, Joe Biden, as well as the Speaker of the Congress and Leader of the Senate of the United States of America, “asking them to assist the entrapped ethnic nationalities to regain their fundamental human rights, freedom, human dignity, and right to self-determination enshrined in the global laws and protocols as already raised above.”

According to NADECO, in its communiqué, others that it would copy the letter to, include the European Union and European Parliament, British Prime Minister and the House of Commons, the President, Christian Association of Nigeria (CAN), President, Supreme Council of Islamic Affairs of Nigeria (SCIA) and two leading traditional rulers in the six zones of Nigeria.

“The above step becomes compelling having regard to all the abnormalities we have highlighted in this communique and because any delay to prevent the occurrence of national crisis and upheaval in Nigeria with about two hundred million citizens would be detrimental to the peace and well-being of its region, the Africa continent and the global community,” the group stated.

The pro-democracy group lamented that governance in the country had degenerated to an unbelievable low level at the present moment to the extent that non-state actors through perhaps gross incompetence and or dereliction of duty of the Nigerian state had failed and or refused to protect the lives and properties of most Nigerian, which it asserted was the most important duty of any government.

It said the failure on the part of the government had thus exposed the country “as either a failing or failed state not worthy of being considered as a nation-state under the United Nations Organization (UNO),” even as it cited the UN Charter, the African Commission on Human and Peoples Rights and the Nigerian Constitution to buttress that any government should take the security of lives and properties of its citizens as its primary duty.

Speaking further, NADECO gave a knock to the Buhari administration over its failure to fulfil its electoral promises that it would restore the country to federal constitutional governance if voted into office, saying rather the president “has insensitively proven his disdain for any agitation and suggestion for restoration to the Federal Constitutional Governance upon which Nigeria secured its independence in 1960.”

“It is, therefore, understandable that President Buhari’s so-called three pillars to secure Nigeria, to revamp the economy and to fight corruption have clearly recorded very low achievements because the current centralist and unitarist governance structure remains unsuitable, unsustainable and counterproductive in a heterogeneous geographical and political pace like Nigeria where the over 350 different ethnic nationalities or group of them have local and international legal and constitutional rights for self-determination to order their lives in accordance with their chosen divergent languages, religions, traditions, cultures, artefacts and folklores etc. of their peoples.

“The Nigerian State has intensified its construction of conspiracy theories against critics who are exposing the wrongly headed and misguided policies of the unitarist and centralist governance that they have established in succession.

“In other words, the Nigerian State has become paranoid in its war with agitators for a return to the 1960 Federal Constitutional governance upon which Nigeria secured its independence,” the group lamented.

On appointments to senior political, economic, security and intelligence posts, NADECO, in its communiqué, said the Buhari- led Federal Government had remained unyielding and recalcitrant in what it called its nepotic appointments to such key positions “so much that what is supposed to be the National Security Council is in fact Northern Security Council in violation and utter disregard to part II of the 1999 Constitution.”

“Till date, PMB is the Chairman, Minister of Defence is Major Gen. Magashi (Kano) and National Security Adviser, Monguno (Borno). The majority of other key officers are also from the North West and North East.

“In other words, only people from PMB catchment area can guarantee his National Security. And the resultant consequences are there for all Nigerians to see in the gross inefficiencies and inadequacies of Nigeria Security architecture,” it said.