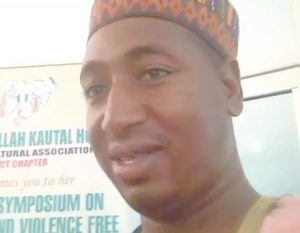 The Miyetti Allah Kauta Hore has asked President Muhammadu Buhari and the National Assembly to stop state governors (especially in the South) from implementing the various anti-grazing laws.

The National Secretary of the group, Engr Saleh Alhassan, while addressing a press conference, described the anti-grazing laws as satanic and a ploy to cripple the economic activities of the pastoralists.

Miyetti Allah Kauta Hore which is a Fulani socio-cultural association said Nigeria should adopt strategies in responding to the challenges of climate change as it affects livestock production. Engr Saleh said anti-grazing laws and policies is nothing but populist and corruption driven agenda designed to destroy pastoralists means of livelihood.

“We want the National Assembly and Mr. President to intervene and stop current attempt by some states governors to criminalize our means of economic livelihood of cattle rearing through the enactment of satanic and obnoxious laws – ‘Anti-open Grazing Laws’ targeted at Fulani pastoralists.

“The Federal Government should create a Federal Ministry of Livestock and Fisheries as obtainable in many African countries.

“Government should take an inventory of all the existing grazing reserve, traditional grazing areas, transhumance corridors, major stock routes and fully develop at least one grazing reserve in each senatorial zone in line with the recommendation of the Inter-Ministerial Committee on Livestock Development in Nigeria 2015, the report of Presidential Committee on Pastoralists and Insecurity 2014 and the National Livestock Transformation Program.”

He said the laws do not take into cognizance the sociological, economical, production system, climate variations and other push factors that are inherent in pastoralists’ movements across ecological zones.

Miyetti Allah further claimed that the laws will destroy livestock production and send into poverty millions of people that depend on the livestock value chain (butchers, transporters, livestock dealers and consumers who are used to affordable sources of be and milk).

“The laws will undermine the relative peace and stability currently enjoyed by the local communities and threatens the social order.

“The laws will exacerbate cattle rustling in the local communities as criminal gangs and state-sponsored vigilantes will use the opportunity to institutionalize their nefarious activities of cattle rustling.

The group, therefore, called on the National Assembly to come to the rescue of the pastoralists by resuscitating and passing the Grazing Reserves Commission Bill and other livestock management bills that were initiated by the previous National Assembly sessions and introduce livestock tracking using GPS technology and support community-based conflict resolution mechanisms.

“These dangerous and satanic laws must be nipped in the bud by the National Assembly to safeguard the constitution as they portend greater danger to the corporate existence of the country.

“These oppressive laws and hostile policies being enacted by state governors are fundamentally going against the Fulani pastoralists’ culture, economic interest and constitutional rights.

“It is important to note that inter-state movement of pastoralists is analogous to interstate commerce, which is an exclusive preserve of the legislative powers of the National Assembly under item 62 of the Exclusive Legislative List.

“To this effect, any action taken by any state assembly that is in conflict with the above section of the 1999 constitution as amended is null and void,” the pastoralists said.

The Group further called for the incorporation of pasture development in the implementation of the Great Green Wall Program in combating densification and the preservation of small water bodies, adding that they also want existing African Union and ECOWAS Protocols/Regulations on pastoralist and implementation strategies put in place in the country.

“A review of the Land Use Act is long overdue to accommodate the interest of all land resources users particularly pastoralists.

“Ranching as envisaged by many requires massive capital investment and difficult to sustain, not economical and is not small livestock holder centred,” Alhassan added.