Messi’s Father Says His Son Could Stay At Barca 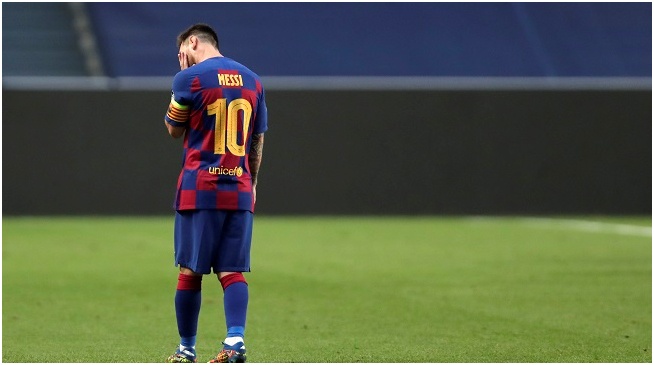 Jorge Messi, father and agent of Lionel Messi, appeared to concede his son could remain at Barcelona this season, according to footage broadcast by Spanish media on Thursday.

Messi senior seemingly replied “yes” when asked by a reporter if they had considered the possibility of staying at the club for another season and then leaving for free next year, in a video recorded by Spanish TV station Cuatro.

He had arrived in Barcelona on Wednesday, landing at the private terminal in El Prat airport on a flight from the Argentine city of Rosario.

Six-time Ballon d’Or winner Messi boycotted Barcelona’s first pre-season training session on Monday, as he tries to force his way out of the club he joined as a 13-year-old.

According to local reports, club directors met with Messi and his advisors for more than two hours on Wednesday, but neither party was willing to alter their stance. Further negotiations are expected to be held in due course between Barcelona and Messi’s entourage, which also includes his brother Rodrigo.

Barcelona insist their captain remains under contract until June 2021 and will only depart if his 700-million-euro ($833 million) release clause is activated, a stance that has been backed up by La Liga, who say that release clause still applies.

But Messi and his lawyers argue he is allowed to go for free this summer according to another clause in his contract, which they claim was triggered on August 25 when a burofax stating Messi’s intention to leave arrived at Camp Nou.

Abu Dhabi-owned Manchester City have expressed an interest in signing him.