The leadership of the House of Representatives, and its Security Committees, yesterday, fumed at the absence of some security operatives, who were summoned to offer explanation on the current state of play. 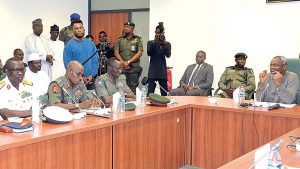 They were to come for a meeting scheduled to discuss the recent Kaduna Airport and Train attack by bandits and how to tackle the current challenges.

The lawmakers, had at its Tuesday plenary, invited the above named government officials and other relevant heads of agencies like the Nigerian Airspace Management Agency (NAMA), Department of Security Services (DSS), Nigerian Civil Aviation Authority (NCAA), Managing Railway Corporation and Federal Airports Authority of Nigeria (FAAN).

But, at the meeting, only the Managing Director of NAMA, Matthew Pwajok, was present while other government officials and heads of agencies sent representatives.

Deputy Speaker, Idris Wase, in his remarks, said the meeting was a matter of urgent importance, because Nigerians no longer have a recipe in terms of means of movement, ease of communication and many lives have been lost.

Bemoaning the absence of the officials, he said the meeting could not go on and should be rescheduled.

“So, we cannot proceed and I am saying with a heavy heart that no matter the assignment that our generals are handling, I believe the parliament requires a listening ear. This is the House of the people. I am saddened, I am not happy.

“I am expressing my disappointment. I do not know if you have any tangible excuse, because in all the agencies, none have the respect to have one chief executive here. It means then, maybe, we are considered to be jokers but we are not jokers. We are not,” he said.

Permanent Secretary, Ministry of Aviation, Abel Enitan tried to explain that his minister, Hadi Sirika, was out of the country on official assignment as approved by President Muhammadu Buhari before the attacks took place.

But a visibly angry Wase warned him not to use the president’s name as an excuse for his boss’ trip, saying the parliament was an institution on its own.

Representative of Chief of Defence Staff and Service Chiefs, Major General Akinjobi O.T, explained that they couldn’t be present at the meeting, because they were currently in a meeting on the directive of the president for the same reason and have been at it since last night.

On his part, the representative of the Police, DIG Sanusi Lemu, said, “The Nigerian police force and other security agencies are pained by the happenings. We apologise for the absence of our commandants. It’s not really deliberate; it’s because of the importance they attached to the parliament that’s why they asked us to come.”

Not satisfied with their excuses, however, Wase interrupting lamented that it was only in the Nigerian parliament that you summon accounting officers and they won’t come. Insisting that the government officials and heads of agencies should be present at the meeting and not send representatives, he opined that if there’s synergy in operation by security agencies, these attacks wouldn’t have happened.

He thereafter asked the representatives to go back, and ruled that the meeting should be rescheduled to Thursday 3pm.