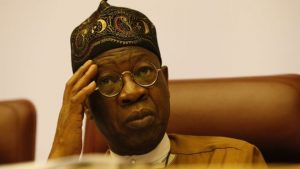 The Independent Corrupt Practices And other Related Offences Commission (ICPC) has raided the offices of the National Broadcasting Commission (NBC) over N10billion fraud perpetrated under the supervision of Nigeria’s Information Minister, Mr Lai Mohammed and suspended Director-General of the commission, Mr Ishaq Modibbo Kawu.

Sources revealed that a N10 Billion loan released to the commission since December last year was diverted to a private account and has so far yielded interests estimated in excess of One Billion Naira already.

Following a tip off, according to the source, the ICPC early last week raided the commission’s headquarters in Abuja and impounded several files, computers and gadgets belonging to the commission.

Lai Mohammed since assumption of office as a minister in Mohammed Buhari’s government has allegedely been enmeshed in a series of financial scams including the recent one which has jeopardized the Nigeria’s Digital Switch Over (DSO) Project that has been operating in fits and starts since 2016.

It has been reported that the Minister in 2015 admitted extorting N13.5 Million from the NBC to embark on a foreign trip.

Investigation by our correspondent revealed that N10 Billion was a loan provided to help offset debts owed to contractors who have been building infrastructure to enable the DSO project commence in earnest.

The DSO is in the process of upgrading the present analogue television broadcast systems to digital terrestrial television (DTT). The project is founded on an international protocol signed by Nigeria among several countries in the Group A batch of the International Telecommunication Union (ITU) in Geneva in 2006. The protocol gave a deadline of July, 2015 to fully switch over from analogue to digital.

Almost all countries of the world have since eradicated analogue television broadcast and transited to the digital platform except only Nigeria.

Nigeria first started the process in 2008 but made no progress. In 2016 the Nigerian Government faced with the vulnerabilities of solely operating an obsolete technology relaunched the program with fanfare in Jos Plateau State, but it was quickly marred with scandals of fraud and embezzlement of funds involving the Minister Mr Mohammed and the then DG NBC, Mr Ishaq Modibbo Kawu

Mr Kawu was suspended from office and he’s still facing criminal charges at the Federal High Court in Abuja, Capital of Nigeria while Mr Mohammed who approved the scam still seats pretty in office.

The project again was stalled. Contractors who had worked on the project since commencement with the belief that payment would be made timely to enable then service bank obligations and sustain the tempo of the project were unable to continue. The reported fraud compelled Nigerian government to halt further action on the project in order to investigate the scams.

But the NBC, it was gathered, raised alarm on the likely difficulties to be faced by Nigeria if the project continued to stalemate. These included local television stations not being able to access spare parts any longer for their equipment.

Given the urgency, Nigeria’s Federal Executive Council (FEC) presided over by President Muhammadu Buhari approved the sum of N10 Billion Naira as loan to the NBC with a total of N9.4 billion to be used as payment to contractors and N600 Million as recurrent fund for the NBC to prosecute project.

But the contractors never got the money even though it was fully released in the first week of January until two weeks ago when they began to receive payments in trickles. In fact, the money never even got to the NBC Accounts- even now!

Rather, Mr Mohammed was said to have allegedly entered into some dubious arrangement with officials of the hierarchy of the finance ministry to divert the money to an interest yielding account for an initial 90 days which was again rolled over in the month of March for a second time until the contractors became restive.

Consequently, a decision to hurriedly liquidate the money from fixed deposit was made, in order to pay the contractors due to an alleged tip off to the Minister that the contractors may have blown the whistle to anti-graft agencies.

Indeed, one of the contracting firms was said to have alerted the ICPC and EFCC to complain that the NBC was fraudulently withholding their money. But the ICPC which swung into action immediately after receiving the complaint was said to have discovered during its preliminary investigation that the money never got to the NBC.

Beside, even the N600million approved for the commission to run the project has been coveted by Mr Mohammed and diverted to the ministry where he contrived a scheme to personally and directly control the funds.

He quickly set up a ministerial task force on DSO – a ploy not only to effectively usurped the role of the NBC and Digiteam — a body of experts already put in place by Nigeria’s federal government to liaise with the NBC with an ultimatum to deliver the DSO Project latest be June 2022, but also ensured the money was not subject to audit and official control of the ministry.

Taking no chances Mr Mohammed appointed himself the Chairman of the task force and unilaterally assumed the power of disbursing the N9.4 Billion and also appropriating the N600 Million which was clearly marked for the NBC.

Mr Mohammed is known to have an undue interest in Inview managed by one Toyin Zubairu said to be his business partner.

The said Zubairu was the CEO of the Defunct HITV, a company Mr Mohammed was implicated in as Legal Adviser before it was mismanaged to liquidation by Zubairu. Mr Mohammed has scheduled Zubairu’s Inview for a payment of N908 Million in the N9.4billion just removed from the private interest yielding account.

Reliable industry sources said that the N908M payment is a fraud as Messrs Inview had already been paid N1.2 Billion for the same services in 2015.

Beside, Mr Mohammed was alleged to have used his power as the minister to intimidate the NBC into paying N350 Million to Mr Zubairu as Digital Access Fee for accessing a platform which the commission paid Zubairu to build for it.

“It’s like I pay a contractor to build a house for me. Then when I moved into the house a bully comes and began forcing me to start paying rent to the contractor for occupying my own house- even after I have fully paid him for his work as contractor” a distraught service provider in the DSO project lamented on Monday after the ICPC raid.

Beside the ICPC, it is reliably learnt that Mr Mohammed had always used the NBC as a personal cash cow and had been crafty enough using his political influence to make DGs of the NBC take responsibility whenever the scams were busted.

First was the Emeka Mbah, DG between 2013 to 2016 before he was arrested and detained by the EFCC for an alleged N15 Billion Fraud. He was alleged to have kept the said N15 Billion in Zenith Bank to generate interest rather than follow the rule of the Treasury Single Account Policy of the government.

Mr Mbah was able to prove to the EFCC that he did nothing without the highest approval. He produced evidences of minutes of meeting with Mr Mohammed presiding where it was agreed to lodge the money in Zenith Bank allegedly as guarantee to contractors engaged by the commission to produce Set-top Boxes to be used for the DSO Program. He produced the Minister’s approvals .

Curiously the EFCC spared Mr Mohammed who approved the dubious lodgement and Mr Mbah was hauled before a federal court in Abuja to face charges bothering on corruption! The scandal led to his sack by the President Buhari who immediately appointed Mr Kawu on the recommendation of Mr Mohammed. Mr Kawu and Mohammed are both from Kwara State in North Central Nigeria.

But just two years into his tenure Mr Kawu’s quickly came to grief when another scandal of N2.5 Billion involving Mr Mohammed erupted. A private company Pinnacle Communications was surreptitiously awarded N2.5 Billion on the approval of Mr Mohammed for no work done whatsoever. It was called “seed money” to enable the company prepare to provide digital telecommunication services to the DSO project.

Mr Mohammed who at the time was a graduate of 40 years and a lawyer with 30 years’ experience quickly claimed he was deceived by Mr Kawu into signing the approval for the whooping N2.5 Billion. He claimed he really knew nothing about the scam and only relied on the recommendations of Mr Kawu. But Mr Kawu and Mr Lucky Omoluwa, CEO of Pinnacle hotly disputed Mr Mohammed’s claim of ignorance. They presented proof that there was series of meetings between the NBC, Pinnacle Communications and Mr Mohammed who presided at all the meetings. Beside he went on foreign trips sponsored by the contractors and still collected official allowances and estacodes for the same trips.

Infact, Mr Kawu was said to have been convinced that the decision to originate the memo followed a verbal directive from Mr Mohammed who wasted no time in rushing to approve the money without raising any questions.

Sources at the commission reveal that N150 Million of the money paid to Pinnacle was traced to the personal account of Jimi Mohammed, son of the Minister now a member of the Lagos State House of Assembly.

But despite the overwhelming evidence of his culpability, like what happened in the previous case, Mr Mohammed is confident that his political weight and connections as a major player in the ruling party will again save him.

Lai Mohammed this time became arrogant and was reported to have thoroughly harassed the investigators from the ICPC and several times either dictated the scope and mode of interrogation or even refused to be interrogated all together.

Expectedly the ICPC arraigned only Mr Kawu and even recommended his suspension from office. Mr Mohammed a co-suspect in the scam was not only excluded but was actually reported to have desperately worked to secure presidential approval on the ICPC recommendation to suspend his fellow suspect with dispatch.

Observers are concerned that the President Buhari’s administration notoriously known for treating allegations of corruption from his cronies with “deodorant” and those of opposition members with harsh “pesticides” may again weigh in and allow Mr Mohammed escape once more with the glaring cases of corruption that is presently raging.

Mr Kawu a brilliant journalist, veteran broadcaster and respected ace columnist of several years standing is still embroiled in the criminal trials, desperate to establish his innocence while Mr Omoluwa, the Chairman of Pinnacle Communications a successful business man of several years wasn’t that lucky. He died in the course of the prosecution with his name tainted. Mr Mohammed has remained tenaciously on his seat to be engaged in several other financial scams confident that he’s a sacred cow in a so called anti-corruption government that has so far glossed over every reported case of corruption reported against its high ranking appointees.