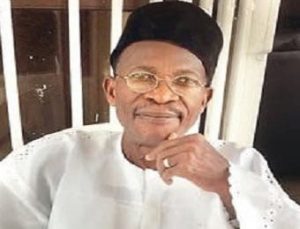 Former labour leader Chief Frank Kokori, has charged the 17 southern governors in the country to arm youths and vigilante groups in their states as a proactive measure against marauding herdsmen and bandits.

Kokori, who is reputed to have led his members in a bitter struggle against the late maximum ruler, General Sani Abacha, spoke in an exclusive interview with Sunday Tribune. He said rather than the governors throwing up their hands in lamentation over the insecurity confronting them in their states, they should deploy their huge security votes to procure arms for able-bodied youths as well as local security personnel.

“So, you protect yourself; every human being is free to protect himself. So, why are they calling the president? In a small remote village, if there’s an attack, you call the president. Why?

“So, the governors are not doing their part. Those youths can protect the communities; it’s just that the governors don’t use their security funds properly.

“So, if they run to me and start complaining that I am doing illegal things, I will tell them that they started it. Illegality versus illegality is illegality.

“In life, you fight gun with gun,” he said, quoting Mao Tse-tung thus: ‘we are advocates of the abolition of war, we do not want war; but war can only be abolished through war, and in order to get rid of the gun, it is necessary to take up gun.’

“Who is a Fulani man from Chad who now understands the forest more than an Ondo man? And the governors will just be shouting. What are they using their N500 million, N1 billion or so security votes to do?” he asked rhetorically.

The ex-labour leader, who is a known ally of the president, said Buhari does not know what is going on in the country and is too tired to continue to lead the country.

“Buhari is nepotistic to the core. But he doesn’t even know what is happening in the country and the so-called cabal will be shouting ‘Presidency’ and signs anything on Presidency. They will write anything and say it’s the Presidency. Buhari has some problems; he has health challenges, too,” he said.