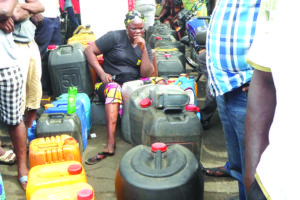 Nigeria’s recurring energy shortage has taken a twist following the recent increase in the prices of kerosene, cooking gas and diesel across the country.

TheEconomy findings show that prices of kerosene and cooking gas have recorded about 40 percent and 50 percent increase respectively, in the last two months. For instance, kerosene which has an official retail price tag of N83 per litter sold above N200 per litter in parts of Lagos and over N300 in other parts of the country in early July, while a 2.5kg cylinder of cooking gas which hitherto sold for N2,500 rose to

N4,000. Diesel also jumped from about N130 per litre it had been sold for about three years to about N200.
No official explanation has so far been provided for the development coming on the heels of recent deregulation policy of President Muhammadu Buhari’s administration that saw the government jerked up prices of petrol to N145 per litter from N86 and kerosene to N83 per litter from N50.

Although, Minister of State for Petroleum Resources, Dr Ibe Kachikwu had since last year called for a switch from kerosene to cooking gas, a cheaper and cleaner energy, the latest rise in the prices of cooking gas and kerosene has cast doubts over the realization of the ‘Kero-to-Gas project’.

With less than six months to the end of 2016, the proposed distribution of free gas cylinders to every household in Nigeria as part of the planned phase out of kerosene as domestic cooking fuel in the country has not really gathered momentum. Reactions are already trailing the development as consumers now pay more for fuel, kerosene, cooking gas and diesel, including the controversial electricity tariff hike, all of which have emanated from the persisting production and supply hiccups.

The blame game
Expectedly, the latest hike in energy price has sparked-off another round of blame game among industry stakeholders. The Depot and Petroleum Marketers Association (DAPMA) linked the scarcity of and the resultant increase in kerosene pump price to lingering foreign exchange crisis.

According to DAPMA Secretary, Mr Femi Adewole, kerosene price may continue to soar due to dwindling foreign exchange (especially the dollar) needed to import the products. Blaming the Nigerian National Petroleum Corporation (NNPC) for the woes faced by kerosene marketers and the subsequent price hike, Adewole said: “the same challenge that we have with the petrol in sourcing foreign exchange is the same we have with diesel and kerosene.”

South-West Chairman of the Nigeria Union of Petroleum and Natural Gas Workers (NUPENG) Tokunbo Korodo, also blamed activities of the Pipelines and Product Marketing Company (PPMC) for the hike in the price of  kerosene. “For more than 28 days, there are no loading activities in PPMC depots nationwide. Oil marketers have resorted to private depots in Apapa to load their trucks; this gives the depot owners the opportunity to sell the products at their own price,” Korodo said, stressing that if there were enough products at PPMC depots, the price would not have gone up.

The question remains: if the kerosene supply is affected, what was responsible for the hike in the price of cooking gas, which is produced locally? The Nigerian Association of LPG Marketers (NALPGAM) traced the price hike to artificial scarcity created through the diversion of Liquefied Petroleum Gas (LPG) vessels to NAVGAS terminal by the PPMC, a subsidiary of the NNPC. “Gas is supposed to be readily available in all the major terminals in Lagos but only one company has gas because some people have hijacked the NLNG domestic supply scheme. They increased the price from N2.4 million per 20 metric tonnes to N2.6 million; and later to N3 million and N3.5 million,” NALPGAM alleged.

NALPGAM President, Basil Ogbuanu blamed the situation on the exchange rate volatility, predicting that cooking gas price will fall as the Naira stabilizes against the Dollars. “The problem of gas could be linked to demand and supply; before now, supply was epileptic, but now vessels have begun to berth and discharge gas. The price will soon fall, we hope that the next gas vessel will push the price down.”

However, the General Manager, External Relations of the Nigerian Liquefied and Natural Gas (NLNG) Dr Kudo Eresia-Eke, said that the gas price hike was caused by infrastructure challenges such as shortage of terminals for the discharge of cooking gas in the country, poor storage facilities at the terminals and delays in getting the product from the terminals.

“The increase in price of LPG is caused by infrastructure problems, and not scarcity of the product. Only two terminals are dedicated for the supply of LPG in Nigeria. These terminals give priority to supply of white products such as petrol, diesel and kerosene. This has made it difficult for LPG vessels to discharge its content promptly,” Eresia-Eke said.

Consequently, the Managing Director of PPMC, Mr Ahmed Farouk assured that allegations of diversion of LPG vessels would be investigated, insisting that he would not tolerate any form of monopoly in the industry. “I am hearing this for the first time but I am not holding brief for anyone. If this is substantiated, we will take steps. No one in their right minds will take that step to frustrate efforts of bringing the LPG closer to the people,” Farouk said.