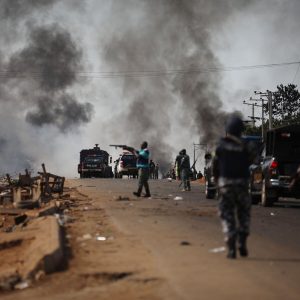 Reports from the Gani Fawehinmi Freedom Park Ojota indicates that the June 12 protests in Lagos  seem to has turned violent with the Police shooting at the protesters as motorists and passersby are caught up in the ensuing melee. Members of the Nigeria Police Counter Terrorism Unit (CTU) earlier warned journalists covering the June 12 protests in Lagos to “better go home” as they were “playing” with their lives.

The CTU and policemen told journalists to leave the protest grounds, saying no pictures or videos should be taken. One of the officers identified as Ugo Nnakwe displayed his tear gas canister with the intention of detonating it if the journalists did not move away.

The heavy presence of security officers at the Ojota expressway continued as they made a show of force by blaring sirens and driving around the express.

However, the situation degenerated as efforts by the Police to force protesters home failed thus resorting to shooting tear gas into the crowd, and also using blanks on the protesters.