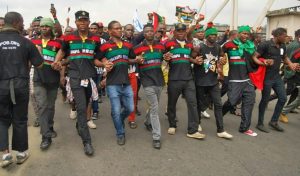 Following heart-rending reports of violence and attacks on persons who defied the ‘Ghost Monday’ directive by members of the enforcement team of the Indigenous People of Biafra, IPOB, people of the region have urged the group to avoid actions that can engender unpleasant reaction against them by the masses.

There were online videos and pictures of killings of purported violators of the IPOB directive, as well as wanton destruction of their vehicles and other properties across states of the Southeast.

Speaking with our correspondent on the development, a Human Rights Activist, Mr Okey Nwanguma warned that any strategy or action to drive home a point or to advance the struggle for the emancipation of a people should not negatively impact or worsen the condition of the same people for whom the struggle is waged. He noted that if such is the case, such a struggle is no longer for, or in the interest of the people.

According to Nwanguma, the report of attacks on innocent Igbos who went about their lawful businesses, including young students whose NECO Exams were violently disrupted yesterday by IPOB members, is a worrisome development.

“I have read disturbing news about attacks, burning of vehicles and killing of persons accused of violating the IPOB declared ‘sit at home’ orders in parts of the Southeast.

“The state of the economy and suffering is extremely bad for the mass of ordinary citizens, especially those who depend entirely on daily income for daily meal and survival.

“Any strategy or action intended to drive home a point or to advance the struggle for the emancipation of a people should not negatively impact or worsen the condition of the same people for whom you claim to wage that struggle. Otherwise, such a struggle is no longer for, or in the interest of, the people,” he said.

Nwanguma who is the Executive Director of Rule of Law and Accountability Advocacy Centre, RULAAC, maintained that forcing people to sit at home and using deadly force and violence to enforce it, is untactful and despicable.

“People should be allowed to exercise their free will. In particular, setting ablaze commercial vehicles carrying passengers who are part of the people you purport to be fighting for, is a pure criminal act and not part of any legitimate or rational struggle. It will have the consequence, among others, of discrediting the struggle and denuding it of public sympathy and support,” the RULAAC boss pointed out.

For a Social Affairs Commentator, Chima Christian, the prime recipients of IPOB’s sit-at-home violence, are none other than the same everyday citizens who constitute a bulwark of its membership, and from whom it draws its highest home-based sympathy and moral support.

While noting that the reported violence in several parts of the South-east highlights a troubling paradox, Chima said propaganda-induced boycott compliance could have served a better purpose to send message across to the relevant quarters.

“For a nation famed for the ‘republican’ nature of her people, I consider propaganda-induced boycott compliance a daring social re-engineering experiment. Later day crude-resort to arms to enforce that same compliance, speak volumes,” he said.

The public affairs analyst who noted that IPOB has unwittingly gained acceptance among the people of the Southeast, however warned that it can lose its appeal with such extremist actions as unwarranted violence.

“To be sure, IPOB worked hard and paid the price for the primacy of power it now enjoys in the South-east. It however risks losing its appeal, especially among its most important demographic group, if it doubles down on reign of terror to enforce unpopular orders.

“There is a reason people usually run back to conventional politics (despite its lethargy) after a short stint with populism. For the South-east, that reason will become manifest in the months and years to come,” he pointed out.

On his part, another Social Affairs Commentator, Samuel Okeke said the development places the question as to who is in charge of the Southeast region.

He lamented that the governors, who ought to be in charge, have lost control of the region due to their insensitivity, lack of leadership and poor performance.

“Who is in charge of the southeast? The Governors should be. But they are not. They lost that power through their lack of leadership. Their failure to respond to the agitation of their people and to communicate compassion, resolve and courage has led to a situation, where a non-state actor now determines when to stay at home and when to go to work.

It is a terrible failure of leadership to observe that hundreds of youths, including IPOB members, have been killed in the Southeast and no Governor has instituted a judicial inquiry or asked his Attorney-General to file criminal charges against some high officials of the security agencies who are implicated,” he noted.