IPOB sues US secretaries of State, Defense over sale of warplanes to Nigeria 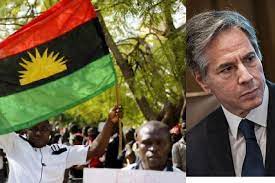 Nigeria separatist group the proscribed Indigenous People of Biafra (IPOB) has sued U.S. Secretary of State Antony Blinken and Defense Secretary Lloyd Austin over the sale of attack planes to Nigeria. IPOB claimed the Nigerian government will use the warplanes to attack its supporters.

United States-based constitutional lawyer Bruce Fein filed the case in a federal court in Washington on Saturday on behalf of IPOB and 10 unidentified individuals based in the secessionists’ heartland in southeastern Nigeria.

IPOB submitted a complaint against the top US officials in a federal court in Washington on Saturday.

Fein is seeking the court to direct Blinken and Austin to block the transfer of six A-29 Super Tucano aircraft to Nigeria’s air force and to seek the return of six that were recently delivered.

He said IPOB “reasonably fear that the A-29 Super Tucano aircraft will be used imminently to kill or maim them physically or to destroy their property.”

Nigeria and the United States agreed on the sale of the planes in 2017 under former President Donald Trump, after his predecessor, Barack Obama, suspended the deal over concerns about Nigerian security forces’ human rights records.

However, Nigeria reestablished a deal with the United States in 2020 and ordered for planes to tackle insurgency in the northeast of the country.

Nigeria’s air force is awaiting the arrival of the second batch of aircraft, which are made in the U.S. by Brazil’s Embraer SA and Nevada-based Sierra Nevada Corp., in a deal worth $593 million.

IPOB said, by allowing Nigeria to receive six Super Tucano planes on July 21, Blinken and Austin violated laws that are supposed to “shield citizens of foreign sovereigns from harm caused by United States weapons in the hands of security forces guilty of gross human rights violations.”

Bloomberg reports that a spokesman for Nigeria’s Justice Ministry said the government is “globally recognized for respecting human rights” and the allegations in the complaint are “speculative guesswork.”

But the Nigerian government accuses IPOB of waging a violent campaign, especially attacks on security structures and personnel in the southeast region.

IPOB’s lawsuit against the United States senior officials came weeks after the Nigerian government announced the arrest of IPOB’s leader Nnamdi Kanu in June, who was abducted in Kenya and returned to Nigeria.

Kanu is in detention in Abuja where he is undergoing a treason trial.