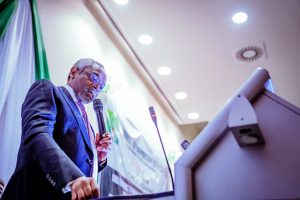 The Speaker of the House of Representatives, Femi Gbajabiamila, has raised concerns over insufficient funds to procure arms for the country’s armed forces. He lamented that 91 per cent of the budget for the military is for recurrent expenditure, leaving a meagre nine percent for equipment.

Mr Gbajabiamila stated this at the public hearing on “A Bill to establish the Armed Forces Support Trust Fund,” on Monday in Abuja.

“I am sure many of you will wonder why the armed forces of Nigeria need an additional financial injection at this time,” the speaker said.

“The fact, based on appropriation records is that about 91 per cent of the current funding to the armed forces go on recurrent overhead, salaries and welfare, leaving only nine per cent for capital purchases.” He added that Nigeria was at war, and could not depend on the budgetary process to fight the ongoing war.

“Nigeria is at war against insurgency, terrorism, kidnapping and all manner of insecurity hence the need to uplift the resources available to our armed services to enable them to procure the best tools to help win this war. So, what we seek to do in this bill is not new or unique to us as a nation,” he said.

The bill, sponsored by Babajimi Benson (APC, Lagos), who is also the chairman of the House committee on defence, was passed for second reading on February 27.

According to the proposed legislation, the armed forces support fund will comprise one per cent of funds in the federation account, 0.5 per cent of the profit of investments made by the National Sovereign Wealth Fund, 0.5 per cent of Value Added Tax (VAT) remitted into the Consolidated Account.

The bill also states that “One per cent of air ticket contract, charter and cargo sales charges to be collected by the airlines” is to be sent to the fund.

Speaking at the hearing, Mr Benson said Nigeria ranked very low in terms of defence spending and that developed countries like the United States, Russia, United Kingdom and Poland have alternative sources of funding for defence. He explained with $2.6 billion defence spending, Nigerian ranked fourth in Africa after Algeria, Morocco and South Africa which spent $9.7 billion, $4.8 billion and $3.1 billion, respectively.

Equipping the Nigerian military has been a recurring issue. In 2018, the withdrawal of $462 million from Excess Crude Account for procurement of 12 super Tucano aircraft caused friction between President Muhammadu Buhari and the National Assembly.

However, despite the investments, there have been reports of armed forces personnel at war fronts lacking equipment to prosecute the war against insurgents and bandits.

In March, the National Security Adviser, Babagana Monguno, said funds for procurement of equipment under the immediate past service chiefs were missing.

“…..Funds are missing and the equipment is nowhere to be found,” Mr Monguno said. But the NSA later denied the statement, claiming he was misquoted.