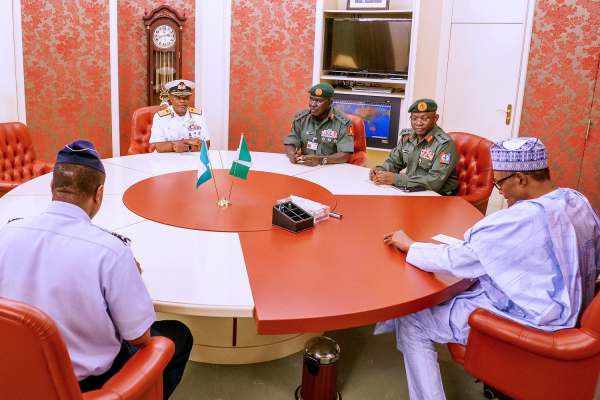 For the umpteenth time, President Muhammad Buhari has been called upon to relieve the Service Chiefs of their jobs for lack of capacity and negligence.

The latest call came from the Coalition of North Central Elders(CNCE), which has appealed to the president to restructure the security portfolio of the nation or sack the Service Chiefs immediately.

Disturbed by worsening insecurity in the country , CNCE was alarmed that an emerging security alert, from the Nigerian Custom boss, about the evil presence of Boko Haram insurgents within Abuja and its environ, was a result of ‘intelligence failure’ on the part of  security agencies.

The National Chairman of  the group, Usman Bida and its secretary, Barr. Moses Okudu, in a statement issued in Abuja expressed disappointment in the assurances and rhetorics of President Buhari to tackle  insecurity, describing it as unappealing. According to them, there is no state in the North central that is free from terrorist attacks, a region that was the most peaceful. Though the CNCE was grateful to the military for mopping up 400 bandits from the zone recently, but they cannot  fall victim to another terrorist group almost at the same time.