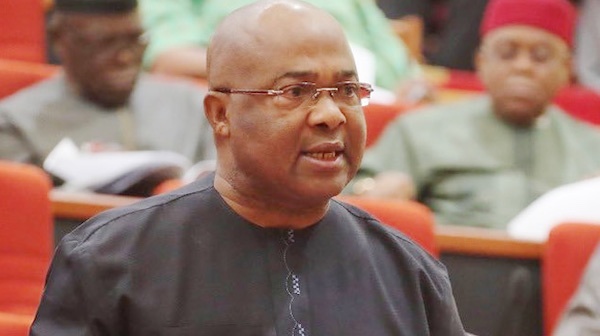 Governor of Imo State, Senator Hope Uzodimma has said that he will set up a Committee that will look into the viability of Parastatals and Agencies in the State.

He said those found to be unviable and unproductive will be merged with those that are efficient and effective so as to maximize productivity for increased development.

He however assured that no worker will lose his or her job as a result of the merger.

Governor Uzodimma spoke at the Executive Council Chambers Government House Owerri when he met with all the Commissioners in charge of ministries, heads of Departments and Agencies of the State, Permanent Secretaries, Directors of Accounts, Directors of Administration and Parastatals.

The Governor reiterated that it is not the intention of his government to owe salaries and pensions, noting that the delay noticed a few months ago was as a result of what he met on ground in the payroll system when he assumed office. He said the situation was so bad that he was compelled to embark on the sanitizing of the payroll system so as to have accurate data of all civil servants and pensioners.

He insisted that payment of salaries is not an achievement to any government but rather the right of workers.He appealed to Imo workers not to politicize the issue of salaries and pensions, noting that by their position civil servants are not politicians.

The governor assured that as soon as the clearing of the mess surrounding salaries and pensions is over the State will move to the next level of productivity and appealed to all finance officers, mostly the Heads of Account in the MDAs, to be prepared to do the right thing always or face the music.

He also used the forum to say that new Digital Identification cards will soon be issued to all Civil Servants through the office of the Head of Service which will serve as their Social Benefit Number. “It will require you to put your password to access the automated salary vouchers, enter the staff mass transit bus and other benefits from the State Government,” the governor said.

The Governor who emphasized the need for E-Governance in the Civil Service informed that for Imo State to be at par with her counterparts all over the world in a digital age, Government is taking the issue of training and re-training of Civil Servants in the areas of ICT seriously, adding that, “to achieve the sustenance of the knowledge and productivity expected of the said programme, every Civil Servant from Grade level 10 and above will be given a Laptop in the nearest future.”

He appealed to all Revenue Generating Agencies in Imo to assist the government to improve the monthly revenue of the State by ensuring that all monies collected are paid into the Treasury Single Account (TSA), warning that “any MDA or individual found to be doing otherwise will not find it funny with the government.”

The Governor promised that all genuine claims by any civil servant in Imo State in terms of salaries and pensions will be paid no matter how long it takes for such a claim to be cleared from the office of the Head of Service.

He seized the opportunity of the meeting to distribute authentic staff Nominal Roll of the MDAs and Parastatals and requested their heads to go back and make the necessary input that will help the government operate an accountable and productive system.

Appreciating the Governor’s efforts towards sanitizing the Civil Service system and ensuring that only those that work for government are paid, the Head of Service, Dr. Camillus Iwuagwu thanked him on behalf of Imo State workforce and pledged their continued loyalty, support and dedication to his administration.

Present at the parley were the Deputy Governor, Prof. Placid Njoku, the Secretary to the State Government, Chief Cosmas Iwu, the Chief of Staff, Barr. Nnamdi Anyaehie, all Commissioners and their Permanent Secretaries, and political appointees.