Governors have shifted ground in their quest for an earnest resolution of the industrial crisis caused by the clamour by judicial and legislative workers for the implementation of financial autonomy for the two arms of government. The governors had proposed to pay lawmakers a certain percentage of their statutory monthly entitlements towards funding the legislature. 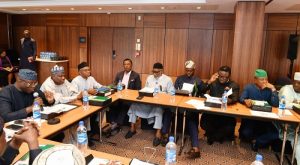 It was also gathered that the governors had also rejected the demand of the Judiciary Staff Union of Nigeria (JUSUN) and the Parliamentary Staff Association of Nigeria (PASAN) that the gross allocations should be remitted to the two arms of government directly.

The governors’ hard-line position was said to be responsible for the delay in the resolution of the strike embarked upon by judicial and parliamentary workers in the 36 states and the Federal Capital Territory (FCT) to press for the implementation of financial autonomy for state judiciaries and legislatures.

However, the governors agreed that the National Judicial Council (NJC) will handle funds for states’ judicial councils to take care of the high courts while the state governments will be responsible for funding the magistrates and customary courts.

In a bid to resolve the issues and end the ongoing industrial dispute, the federal government has invited the leadership of JUSUN and PASAN to a negotiation today.

A statement by the Deputy Director Press and Public Relations in the Ministry of Labour and Employment, Mr. Charles Akpan, said the Minister, Senator Chris Ngige, would host the negotiations with the workers.

An earlier plan to hold talks with the striking workers was stalled by a lack of harmony in the positions of the team representing the federal government and that of governors.

The Solicitor-General of the Federation, Mr. Dayo Apata, who had represented the federal government, and the Director-General of the Nigeria Governors’ Forum (NGF), Mr. Asishana Okauru, had presented different position papers, which stalled negotiations.

A source confirmed that Ngige would schedule a meeting with the leadership of JUSUN and PASAN to sort out any other outstanding issues. He said: “Right now; there’s a consensus. There’s some agreement, grey areas have been cleared and I think the minister is committed to putting a meeting together with the workers and in the next couple of days. I think all the grey areas will be sorted out.

“Some of the grey areas for the judiciary, for instance, is that it is clear to all the parties now that the National Judicial Council (NJC) will be handling that because that’s the position of the constitution. They have been doing that for recurrent at the state level, but have not been doing it for capital spending.

“That will continue, especially for courts of record. The governors will be in charge of customary courts and magistrates courts.

“For the legislature, the major issue was whether the deduction should be based on gross or net. What they have agreed is that it is going to be an agreed percentage of appropriated amount.”

Following the different positions adopted by the federal government and the governors, Ngige had urged the governors to rework the agreement for negotiations to resume.

As part of its implementation, the state governments were expected from May 1, to set up the States Accounts Allocations Committee (SAAC) with members from the states Assembly committee chairmen on Finance and the States Commissioners of Finance to discuss on monthly basis the disbursement of funds. However, the governors and speakers could not reach a consensus on how much to be given to each state legislature monthly.