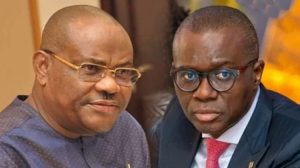 A nongovernmental group, Access to Equity has called on both Governors Nyesom Wike of Rivers State and Babajide Sanwo-Olu of Lagos State not to be discouraged by yesterday’s stay of execution pronouncement by the Court of Appeal Abuja on collection of VAT. The convener of the group Daniel Ozioko said that the two states should fight it out to the Supreme Court.

According to the group, the only way Nigerians can restructure this country is to through the courts.

The Court of Appeal, Abuja Division Friday ordered the government of Rivers and Lagos states to refrain from any action giving effect to the August 9, 2021 judgment of Rivers State High Court, which conferred powers on Rivers State to collect Value Added Tax (VAT) and Personal Income Tax.

Delivering the ruling on an appeal by the Federal Inland Revenue Service (FIRS) seeking a stay of execution of the judgment and injunction, the panel of Justices of the appellate court urged parties in the suit to hold on in the execution of the judgement pending the determination of a motion by Lagos State to join as an interested party.

It would be recalled that a Federal High Court sitting in Port Harcourt had, last week restrained the FIRS from collecting some taxes from Rivers residents.

The court declared that Rivers Government, not the FIRS should collect the VAT and Personal Income Tax (PIT) in the State.

The court presided over by Justice Stephen Dalyop Pam, issued an order of perpetual injunction restraining the FIRS and the Attorney-General of the Federation, both first and second defendants in the suit, from collecting, demanding, threatening, and intimidating residents of Rivers State to pay to FIRS, personnel income tax, and VAT.