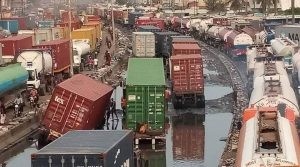 Following allegations of corruption and ineptitude by truckers, the federal government has announced that a new Task Team would be reconstituted to manage traffic on the port access road. The Permanent Secretary, Federal Ministry of Transportation, Dr. Magdalene Ajani, disclosed this in Lagos during a meeting she held with stakeholders including officials of the Federal Ministry of Works and Housing, Nigerian Ports Authority (NPA), Nigerian Shippers Council (NSC), Federal Road Safety Commission (FRSC), Seaport Terminal Operators Association of Nigeria (STOAN), truck owners and representatives of shipping companies.

The meeting was held to find solution to the perennial gridlock on the access road leading to the Tin Can Island Port Complex, Lagos in a renewed effort to check congestion at the nation’s second busiest seaport.

Ajani said the blockade of Tin Can Island Port by trucks due to the activities of different government officials, truck owners and drivers was no longer tolerable and must be dealt with decisively.

Before the deployment of an electronic call-up system by NPA in January 2021 to manage the movement of trucks on the port access road, she said urgent actions must be taken to address the gridlock, which has almost brought cargo evacuation at the Tin Can Island Port Complex to a halt.

According to her, “We must have some form of orderliness. Trucks must only get on the road when they are called to come in, and if that happens we shouldn’t have trucks on the road.”

She said: “We also want to plead with the Federal Road Safety Commission and the Police; enforcement is very key. Enforcing means don’t let people who should not be on the road come on the road, because if there are no trucks on the road, we won’t have the miscreants. There will not be anyone to coerce on the road. Who gives the miscreants access into the port when they are not supposed to be there?

“Before the electronic call-up system starts, you’ve been operating for decades. How have you been calling up your trucks? Manual, I presume. So, why can’t you get back to that and make sure that it is a functional call-up? Functional call-up is the word.

She said though instructions have been issued by the Federal Ministry of Works and Housing to, “open up the roads,” leading to Tin Can Island Port, this might not solve the gridlock until trucks that have no immediate business at the port are taken off the road.

“If I have the communication as a Ministry, then we should be able to do the needful. So I have requested that we get the communication both to the Ministry and to all the institutions – Lagos State, the Police, all the parastatals; NPA, NSC, are all part of the transportation.

“So once we have that, then we can sit down to chart what needs to be charted. We have invited the relevant agencies for 8 a.m. meeting tomorrow because we must chart the course of who takes responsibility for what to at least decongest the road. That is the immediate thing we have right now to do, and then allow people to come out of the port and open up the roads if need be.

“I’m using the word if need. We may just open temporarily to move all those ones that are blocking the roads but going forward, we need to do the right thing, and that is discipline ourselves and having an effective manual call-up till we’re able to implement the electronic (call-up), ”she said

Ajani called on FRSC to deploy more truck towing vehicles on the port access roads to remove broken down and unwanted trucks to free up the road.