The Nigerian government has continued its clampdown on illegal mobile loan apps ripping people off through fraudulent practices. This comes even as the Federal Government said there are about 70 to 90 online lending applications currently operated by various firms in Nigeria. 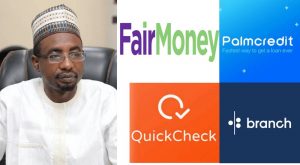 According to the Executive Vice Chairman, Federal Competition & Consumer Protection Commission, Babatunde Irukera, the government is in a collaborative engagement with the media to review and analyse the state of the market.

He said some of the online apps were legitimate while others were operating illegally.

“Not all the online loan applications are illegal. Some are completely illegitimate; some are legitimate but illegitimate in their approach to tracking debtors. We are against illegitimate works,” Irukera said.

The FCCPC boss urged companies to be responsible and responsive to customer care services.

According to him, the government is more accessible and easier to find than private individuals because individuals want to make a profit.

Irukera said, “Government for all its inefficiencies, is more accessible, easier to find than private individuals who just sell to make a profit.

He said the media is a critical infrastructure in the constitutional obligation of the government to protect the consumers’ interest.

“What we intend to achieve is to educate people of their rights,” he said.

Irukera also said that one of the challenges in the telecommunication sector is transparency in billing.