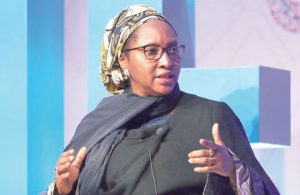 The Minister of Finance, Budget, and National Planning, Zainab Ahmed, has said that the Federal Government is targeting single-digit inflation by 2023. This is as she also said that the $3.3 billion Special Drawing Rights (SDR) from the International Monetary Fund (IMF) has helped to boost the country’s external reserve and will help stabilize the naira.

This was disclosed by Ahmed during an interview with Bloomberg Television, where she said that Nigeria will be raising $3 billion with the sales of Eurobond in the second week of October.

Ahmed said that the $3 billion Eurobond is part of the $6.1 billion external borrowings approved by the Federal Government with the remaining part of the debts expected from bilateral and multilateral sources.

The Minister said, ‘’The government has approved to raise $6.1 billion from overseas. So we are looking at doing half of that in the Eurobond market and the other half from bilateral and multilateral sources. Depending on how the market goes, maybe we can do a little bit more.’’

She said, ‘’The government is now working to reduce its debt-service burden by increasing revenue, restructuring its debt portfolio through the conversion of expensive short-term notes into longer tenors, and also reducing its overall borrowing. Our target is to triple revenues from about 8% of GDP to 15%, and also grow the economy by 7%.’’

On inflation and oil prices, Ahmed said, “We certainly feel we have passed the worst of it. Our projection is that inflation will continue to go down throughout 2021 and also 2022. Target is to get to single digit inflation by 2023.”

‘’There is an indication that the market will still squeeze a little bit more. We have been lucky so far that prices have been trending upwards but anticipate that prices will go down. So we are prepared for the worse. We hope that it does not go below $40 a barrel.”

Going further she said, “The central bank is doing everything within limited constraints to stabilize the currency. The SDRs of $3.35 billion just received from the International Monetary Fund have helped shore up the reserves and will help stabilize the currency. Also, the withdrawal by the central bank of funding to unauthorized dealers will increase supply to the formal market to meet demand.

“We are trying to convert the central bank borrowing into debt notes and also cut borrowing to what the regulation provides.”

It could be recalled that this is the first Eurobond that Nigeria is raising in 3 years since the crash of oil prices affected the country’s revenue. The Federal Government had said that it is set to raise the $3 billion through the launch of its planned Eurobond on October 11, with Lagos, New York roadshows with the new creditors expected to help fund the 2021 budget deficit.

The government through the Debt Management Office (DMO), earlier in August appointed transaction advisers for its Eurobond issuance. The 2021 budget deficit is expected to be about N5.60 trillion and will be largely financed from foreign and local borrowings.

Recall that Nigeria’s economy rebounded strongly in June, with a GDP growth of 5.01%, the fastest growth in 7 years, from a contraction of 6.1% the previous year as the easing of coronavirus restrictions allowed economic activity to pick up.