Boxing fans have been left furious after reports Anthony Joshua and OleksandrUsyk’s highly-anticipated rematch might take place in Saudi Arabia.

Joshua has already held a rematch against Andy Ruiz Jr – the only other man to defeat the Brit – in Saudi Arabia. And Joshua was able to defeat the Mexican as he went back to basics to reclaim his championships, which he lost to Usyk last summer. 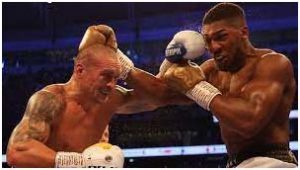 And it looks like he could be set to fight there again. Alexander Krassyuk, Usyk’s promoter, told BBC: “Saudi is the place we are in discussions with at the moment. Late June is the date we are looking at. Nothing has been confirmed on paper. We are working on it.”

It sparked a furious response. “These big fights should be in the UK with the best atmosphere,” one fan fumed.

Another added: “Eddie Hearn slowly turning boxing into a rich man’s sport. AJ’s loyal fans are going to have a nightmare getting to Saudi. Many won’t be able to go.”

“It’s hilarious at this point. Western political point-scoring is something else. No words,” a third tweeted. Before a fourth added: “Have a massive English fighter loved by many English viewers but yet barely put him in the UK because they want more money from the rich!”