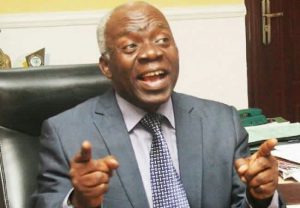 The law firm of Femi Falana, a Senior Advocate of Nigeria (SAN), has asked Abubakar Malami, Attorney-General of the Federation (AGF), to provide information on the charges brought against 800 suspects linked to the Islamic terrorist group, Boko Haram.

In a Freedom of Information (FoI) request signed by Samuel Ogala on behalf of the law firm, the AGF was asked to provide the information of their prosecution within seven days in accordance with the act.

The letter read, “In November 2020, the Governors of the North East Region applied to prosecute Boko Haram suspects who were arrested and held in detention by the security forces.

The application was made on the ground that the process of prosecuting terrorists, which was solely reserved for the Attorney General of the Federation was unnecessarily unwieldy. Nonetheless, the application was not granted.

“In April, 2021 the governors expressed their reservations over the delay in the trial of the terror suspects, demanding a prosecutorial power from the Attorney General of the Federation to enable their respective State Governments to prosecute the detained Boko Haram suspects. The request was also rejected.

“However, by May 2021, the Office of the Attorney General of the Federation was widely reported in the print and electronic media to the effect that the Federal Government had concluded arrangements to prosecute about 800 suspects linked to the Islamic terrorist group, Boko Haram, as soon as the industrial action embarked upon by the Judiciary Staff Union of Nigeria (JUSUN) was called off.

“In the light of the above, we request that our law firm be furnished with information with respect to when these Boko Haram suspects would be arraigned in court, since the strike by JUSUN has since been called off.

“Kindly ensure that we are furnished with the requested information within 7 days of the receipt of this letter in accordance with the provisions of the Freedom of Information Act, 2011.

“Honorable Minister, whilst we anticipate your expeditious consideration of this application, please do accept the assurances of our esteemed regards.”

The senior lawyer had also last week written to Malami, requesting for information on the prosecution of over 400 suspects arrested for funding Boko Haram and bandits.

It had been reported in April that dozens of persons were arrested by security agencies during a nationwide crackdown on the suspected financiers and collaborations.

They were reportedly arrested in an operation being coordinated by the Defence Intelligence Agency (DIA), and in collaboration with the Department of State Services (DSS), Nigerian Financial Intelligence Unit (NFIU), and the Central Bank of Nigeria (CBN). Their whereabouts ever since has remained practically unknown.