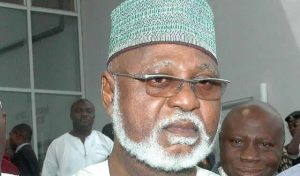 The recent accusations and counter accusations of the alleged link between former Nigeria Military Head of State, General Abdulsalami Abubakar and the bandits has been getting the attentions of top Nigerians.
Recently, former Niger State All Progressive Congress (APC) spokesperson, Jonathan Tsado Vatsa has asked Abdulsalam to as a matter of urgency exonerate himself from reports linking him to helicopter supplies to bandits, by addressing the people instead of a mere press statement.
While dismissing the reports linked to the former Head of State to supplying food and weapons to bandits terrorising parts of the state, the APC chieftain said such report remains unfortunate and wicked.
The former spokesman of the APC in the state however advised Abubakar not to stop at a mere press statement to exonerate himself from the said online report, but “address the people of the state and put the records straight in other to clear himself of this heinous allegation”.
Vatsa, a former Commissioner for Information, Culture and Tourism in Niger State, while dismissing the report, expressed surprise that one year after this rumour has been on, nobody has been able to show the public the image of the alleged helicopter.
He stressed: “We would have loved to see the image of the helicopter. This rumour is over one year now that a helicopter belonging to the former Head of State, supplying food and weapons was brought down by the villagers through ‘black power’.  But till now nobody has shown us the picture or the crash site.
Vatsa, who is the Coordinator on Public Affairs to Governor Sani Bello, nevertheless threw his weight behind the call by a Northern group, the Arewa Consultative Forum for full investigations into the report to unravel the mystery behind the helicopter saga.
Vatsa pointed out that all well meaning Nigerians should support every effort that will bring the security situation in the country to an end. Accordingly, he said: “We must join hands to address this security situation before it consumes all of us.
“Linking the former Head of State to helicopter supplying weapons and food to bandits in the state without any physical evidence is a mere distraction from the reality on ground.
“I think the security agents have what it takes to do a thorough investigation into the matter and let Nigerians know the through situation.”
Vatsa then commended the Army and other security agencies for the ongoing Military operations in forests across the state, which, he said, is beginning to yield some positive results leading to the return of some Internally Displaced People to their homes.