The Nigeria Football Federation has earlier said it would appoint a new coach for the country’s senior men’s national team after Eguavoen left the position following the team’s failure to qualify for the 2022 Qatar World Cup. 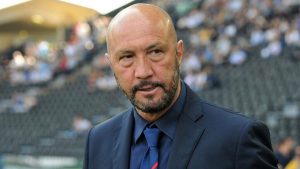 According to Tutto Napoli, Italian legend Zenga is believed to have joined the list after being contacted by the country’s football governing body.

“Walter Zenga can return to coaching. The former Inter goalkeeper is ready to get back in the game after his last experience at Cagliari in 2020,” the website wrote.

“His coaching career could start again from Africa. There is a national team waiting for him. Walter Zenga is among the candidates to be able to take over the reins of the Nigerian national team. He could therefore train Osimhen.”

The former Inter Milan goalkeeper, Zenga enjoyed a successful playing career, winning the Serie A title in 1989 and the UEFA Cup in 1991 and 1994 with the Nerazzurri.

Since he began his coaching career, the 61-year-old has managed clubs in the United States, Italy, Turkey, Romania, Serbia, Saudi Arabia, the United Arab Emirates, and England.

The highlight of his coaching career was winning the league and cup double with Serbian giants Red Star Belgrade in 2006.