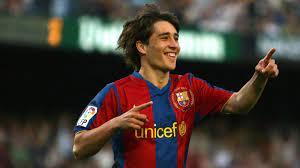 Bojan, 30, played for Stoke between 2014 and 2019 after beginning his career at Barcelona.

He has been without a team since leaving Major League Soccer side Montreal Impact at the end of 2020.

“This opportunity is one of the best, both personally and professionally, and I can’t wait for this big challenge,” said Bojan.

Bojan, who has also played for Roma, AC Milan and Ajax, added: “I have been attracted to Japanese culture for a long time, and thanks to Vissel Kobe, I can experience Japan for myself.

“Iniesta is special to me and I am happy to be able to play with him again. I want to score a lot of goals from his assistance.”

Bojan became Barcelona’s youngest player to feature in La Liga when he made his debut in 2007 at the age of 17 and helped them win the Spanish title on three occasions and the Champions League twice.

He made one international appearance for Spain and scored 16 times in 86 games, including 14 Premier League goals, during his five-year spell at Stoke.