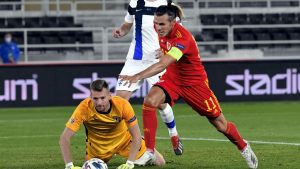 Wales fought back to draw with Switzerland in their opening game of Euro 2020, as Kieffer Moore marked his return to the starting line-up with what could prove to be a vital equaliser.

In only his third start in nine matches under interim manager Robert Page, the Cardiff City striker was close to giving Wales an early lead when his header was superbly tipped over by Yann Sommer.

Switzerland took control of the match from that point and, after squandering several chances, they eventually scored as the impressive Breel Embolo headed in from Xherdan Shaqiri’s corner.

Wales were slow to improve from their sluggish start but, with 15 minutes left, Joe Morrell’s delicately clipped cross found Moore, whose flicked header into the bottom corner sent the small but loud pocket of Wales fans in Baku wild.