Electoral Act: Akpabio, Onu, Nwajiuba resign, others in a fix

Following President Muhammadu Buhari’s bombshell yesterday shortly before the end of the Federal Executive Council (FEC) meeting that ministers eyeing political offices, who have obtained nomination forms, must resign on or before Monday, May 16, the Minister of Science and Technology, Ogbonnaya Onu, has resigned. He resigned last night. This was confirmed by highly reliable sources within the Office of the Secretary to the Government of the Federation (SGF) and the Ministry of Science and Technology. 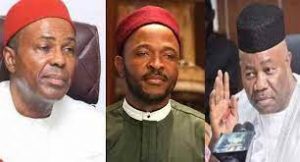 “The Minister was at the office of the SGF to drop his resignation. That was expected, seeing as the President asked that they all should resign,” the source said. Onu had on May 6, declared for the presidency.

Also, Niger Delta Affairs Minister, Akpabio, has resigned in line with President Buhari’s directive. Personal Assistant to the Minister on Media, Jackson Udom, confirmed his resignation. He said: “The Minister has resigned. He has submitted his resignation letter to the SGF. We are waiting for him at the ICC, where he is coming to submit his nomination form.”

In the same vein, Personal Assistant to President Buhari on New Media and Digital Communications, Bashir Ahmad, has also resigned his appointment following his principal’s directive. Ahmad, who picked the House of Representatives nomination and expression of interest forms, is seeking to represent Gaya, Ajingi and Albasu, Kano State, in the Lower Chamber.

Checks on Wednesday evening showed that Ahmad had removed the bio ‘Personal Assistant on New Media to @MBuhari, President of the Federal Republic of Nigeria’ from his profile on Twitter. He now claims to be ‘Digital Communication Enthusiast’. Ahmad is to challenge the incumbent occupier of the seat, Mahmoud Abdullahi Gaya, who is also of the ruling APC.

Minister of State for Education Emeka Nwajiuba is said to have put in his resignation on April 28. Confirming this development, Mr. Paul Odili, Special Assistant to the former Minister of State for Education, Nwajiuba, said: “The Minister, on accepting the nomination form on April 27 bought for him by his supporters led by an umbrella group, Project Nigeria, wrote the President on April 28 informing him that having accepted the nomination by his supporters to contest the office of the president on the party’s platform, he would like to disengage from office to enable him concentrate on his campaign and to avoid any conflict of interest.

“I can tell you Mr. President immediately accepted his letter of resignation. The President approved his resignation upon resumption from the Eid break on May 3, and then travelled out. Nwajiuba left the announcement for the President to do as protocol demands. The President actually announced that resignation today (Wednesday) at FEC before giving the order.”

But the Labour Minister, Chris Ngige, has, however, disclosed that he would not resign pending clarifications as demanded by the President. Reacting to the directive, Ngige said he is not in a hurry to resign from his appointment and that he has to consult with President Buhari and his constituents before tendering any resignation letter.

According to him, Buhari gave a window for those that need clarifications on his pronouncement to meet him. “I have no reaction for now because the President said if anyone wants clarifications, the person should meet him.

Indeed, those affected by President Buhari’s directive coming moments after the Court of Appeal in Abuja, yesterday, voided the ruling of a high court that nullified the controversial Section 84(12) of the Electoral Act 2022, are Ministers of Transportation, Rotimi Amaechi; Niger Delta, Godswill Akpabio; Labour and Employment, Chris Ngige; Science, Technology and Innovation, Ogbonnaya Onu; Minister of State for Petroleum Resources, Timipre Slyva and Minister of State for Education, Emeka Nwajiuba; who have joined the presidential race on the platform of the All Progressives Congress (APC).

Others are Minister of Justice and Attorney General of the Federation, Abubakar Malami, seeking to vie for the governorship of Kebbi State; Minister of State for Mines and Steel, Uche Ogah, who is interested in running for governorship in Abia State and the Minister of Women Affairs, Pauline Tallen, who declared her ambition to contest for the senatorial seat in Plateau State.