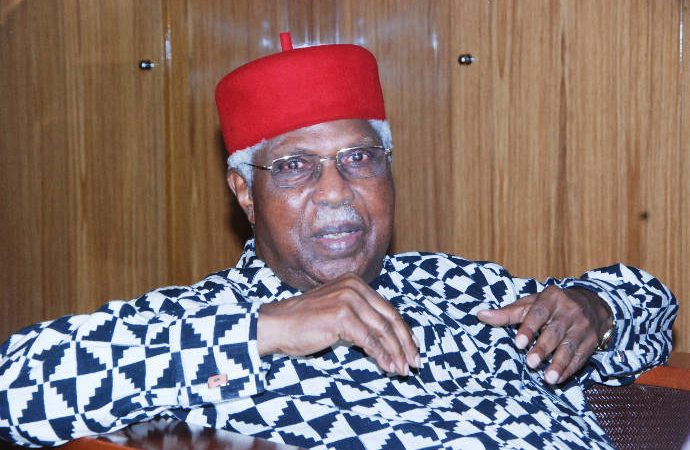 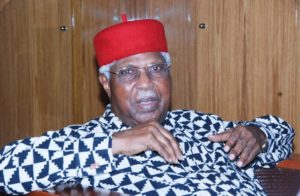 Former Vice-President of Nigeria and presidential aspirant, Dr. Alex Ekwueme has declared his support and desires for Ndigbo to close ranks and work towards actualization of the Igbo presidency.
Ekwueme who made the declaration after attending a child dedication in Calabar, Cross River State also provided brief insight into his failed bids to become Nigeria’s president at the height of his illustrious career. “I was vice president up till December 1983 and by the old National Party of Nigeria (NPN) order, and I would have contested for the number one position in 1987, but the military intervened in 1983 and the civilian regime was cut short. I tried again in 1998 and (Olusegun) Obasanjo was released from prison, and he came and won, supported by his colleagues in the military. I tried again in 2003 and the same thing happened. I pray that the other people (Igbos) can take it up from there and make progress.”
The former PDP BOT Chairman, however, did not state whether the Igbos should work towards actualizing the elusive presidential project in 2019 or 2023.
Meanwhile, President of Ohanaeze in Anambra, Chief Damian Okeke Ogene, has declared that Igbo presidency is long overdue, stressing that the apex Igbo socio-political organization would soon make public its stand on the issue. “Our National President Chief Nnia Nwodo is going to make the stand of Ohaneze known as regards to the presidency. Igbo presidency is long overdue whether it is 2019 or 2023, our own National President will make our stand known,” he said.
According to the Ohanaeze chieftain, agitation for Biafra is a way of expressing justice, fairness and equity which is lacking in the present Nigeria. He argues: “If there is justice, fairness and equity, the whole world can be one country. It is because of injustice people say we can be on our own. As far as I am concerned, immediately after the war, the Gowon administration said three Rs and we believe in three Rs, reconciliation and reconciliation, reconstruction and none of them has taken place. It looks like to us, the war has not ended.”
On the continued detention of Nnandi Kanu and the position of Ohaneze Ndigbo, Mr. Okeke Ogene said: “We are all human beings and we are not ready to shed any blood, it is not necessary and we have advised our own youths and our own son whether IPOB or MASSOB, what they are saying we are part of how to address the injustice but for violence we are not part of it. We advised the federal government that you do not use a sledge to kill a millipede. Our youths are demanding justice, equity and fairness and they should not be killed.
“You and I here cannot release Kanu, the courts have said release Kanu but the powers that be is beyond me and we have been saying leave this young man, give him to us and we will manage them.”
By Olisemeka Obeche