He said it was the turn of the South-East to produce Nigeria’s next President after the regime of President Muhammadu Buhari in May 2023.

The elder statesman made his position known in an exclusive interview with our correspondent on Tuesday. 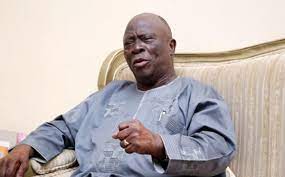 According to him, it is an injustice for a South-West President to emerge in 2023 after ex-President Olusegun Obasanjo from Ogun State had ruled from 1999 to 2007; while Vice-President Yemi Osinbajo, also from Ogun State, has been in government since May 2015 and would have spent eight years in power by May 2023.

The 94-year old elder statesman added that the South-South zone has also had a shot at both President and Vice-President positions with ex-President Goodluck Jonathan between 2007 and 2010 (as VP) and from 2010 to 2015 (as President).

Adebanjo, however, said for Nigeria to have another President, the country must first be secured.

The nonagenarian said, “Right now, is there a country for them to be President? There must be one country first before you can talk of an election. Is this the country Jonathan handed over to Buhari? Whether a Southern or a Northern candidate, let us unite everyone. We can’t get everyone united until we change this constitution.

“Are you safe? Talk about security. How am I sure that I won’t be shocked when I go to the police station, when electoral officers, soldiers, and policemen are being shot dead and I can’t travel to Maiduguri safely?

“All those who are clamouring for Presidency, be it Jagaban (Tinubu) or Osinbajo, they should assure us of our safety first, that the country is safe, that we are one, then we talk of who is going to be President. They should forget about their ambitions now until there is safety. Nobody can go to the South-East now, and we are all living in denial.”

Asked if he was supporting Tinubu, Osinbajo, or any President from the South-West, the Afenifere leader said, “How can I back a South-West candidate? That is not equity. Has Obasanjo not done so for eight years? Has Osinbajo not done eight years as VP? Has Jonathan not done five years as President? Is the South-East not part of Nigeria?

He is entitled to his opinion, say VP, ex-Lagos gov’s camps

Pro-Tinubu and pro-Osinbajo groups have however expressed their disagreements with the statement made by the Afenifere leader.

The chairman of the pro-Tinubu group, South West Agenda 2023 group, Senator Adedayo Adeyeye, during a telephone interview said the rotation principle of the presidency is between the North and South of the country.

He said, “Chief Adebanjo is our leader and a man I respect. He is now in his 90s and has paid his own dues; we are their followers and we are also entitled to our own views and our view is that Asiwaju Bola Tinubu should go ahead and contest the presidency.

“The rotation principle in Nigeria is between the North and the South and whenever it rotates to any of the regions, whether South or North, every of the geopolitical zones in that region are free to contest the presidency. Now, it is the turn of the South and we absolutely believe that anybody in the South, including those from the South-West, are free to throw their hats into the ring and challenge for the presidency.

“This is exactly what Asiwaju Bola Ahmed Tinubu is doing and he is enjoying tremendous support not only in the South-West which is his own base, but throughout the entire length and breadth, nook and cranny of Nigeria and therefore, no person will sit in one corner and say Asiwaju Bola Tinubu should forget his presidential ambition. Certainly, he will contest for the presidency.”

The Convener, Progressive Lawyers for Osinbajo, Dr Kayode Ajulo, explained to newsmen that the opinion of Adebanjo does not indicate the position of the Afenifere group.

He said, “The Presidency of the Federal Republic of Nigeria is not about making emotive statements. I know that if Afenifere wants to say anything, it has to be decided on. Afenifere is not a conclave of what people don’t know what is being done there. The way we have been doing it is that the issue would be deliberated upon by Afenifere and there would be a communique collectively passed. I ask, where is the communiqué of Afenifere saying this?

“For some time now, I have not seen such things from Afenifere. I have not received any notification to this effect and no one else has confirmed receiving any invitation. Baba Adebanjo is entitled to his opinion. But where is Baba Reuben Fasoranti? Where is Baba Sehinde Arogbofa? Where is Chief Sola Ebiseni? Where is Olu Falae’s opinion on this issue? This is not an issue that only one person will just make a sweeping remark. Where did these men deliberate on this issue?

“I am worried that it is being termed Afenifere’s position. Afenifere has procedures, ways and manners such an issue is to be discussed. As it is, I see more of Chief Ayo Adebanjo’s personal opinion which he is entitled to, but please it is clear how the President of Nigerians should emerge.”