Apr 20, 2022
A lecturer and Head of the Music Department, Delta State University, Abraka, Prof. Ovaborhene Idamoyibo, who was kidnapped on April 9, 2022, is dead.
It was gathered that the university don was found unconscious after his abductors released him following the purported payment of a ransom of N3m. 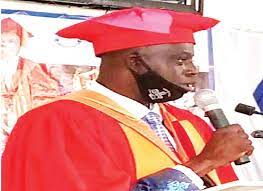 Idamoyibo was kidnapped by gunmen in Eku, in the Ethiope East Local Government Area of Delta State while returning to Abraka after a family meeting in Sapele. His abductors had demanded from the family N50m as ransom to secure his release.
Our correspondent gathered that he was released on Sunday night, but was found unconscious by those who went to pick him up.
He was then rushed to a private clinic for first aid treatment, but was referred to the Oghara Teaching Hospital on Monday after his condition did not improve.
The lecturer was said to have given up the ghost on the way to the Oghara Teaching Hospital and was pronounced dead on arrival by doctors.
The state Police Public Relations Officer, DSP Bright Edafe, confirmed the death of the professor.
In a related development, the wife and daughter of the Plateau State Commissioner for Environment, Usman Bamaiyi, who were kidnapped by gunmen, have regained their freedom. They were released after spending 11 days in captivity.
Sources in Gindiri community, in the Mangu Local Government Area of the state, where they were kidnapped, confirmed the development in Jos on Tuesday.
They said the two kidnap victims were set free on Monday night.
We had reported how Bamaiyi’s wife and daughter were kidnapped in Gindiri in the early hours of Saturday, April 9, 2022.
The two persons were abducted when some heavily armed men attacked their house around 2am. The commissioner was, however, not at home when the incident occurred.
A family source, who confirmed the release of the abductees, said, “Yes, it is true. They were released on Monday night.
“We are happy that God spared their lives. Every day while they were away, some members of the community went to their house to pray for their release. We thank God that our prayers were answered.”
The state Police Public Relations Officer, Ubah Ogaba, could not be reached for comment on the development.
PUNCH