Musa Darazo, a National Youth Service Corps, (NYSC) member posted to Gombe state, has pledged to donate his monthly allowances for the purchase of a presidential expression of interest, and nomination form for Alhaji Bola Ahmed Tinubu. 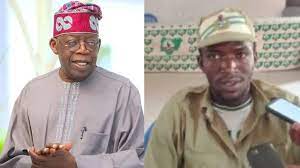 It could be recalled that the National Executive Committee (NEC) of the ruling All Progressives Congress (APC) has fixed the cost of its presidential expression of interest and nomination forms at N100 million.

The party’s NEC had explained that the expression of interest form was N30 million while the nomination form costs N70 million.

Speaking with newsmen in Bauchi on Friday, the Batch A stream II corps member, with NYSC call up number NYSC/80B/2022/060482 and state code GM/22A/3185, said the gesture was borne out of pure love for Tinubu, the National Leader of APC.

“I am doing this not because of anything but because of the capacity and capability I see in him to govern this country.

“He has no idea of my intention, he doesn’t even know me and we have never met before.

“As we all know in Nigeria, we are facing many challenges and we have to have leaders like him with international connections at the helm of affairs and to govern this country come year 2023.

“Let me refer you back to Lagos state when he was the governor, he spent two years without receiving the federal allocation and he governed the state with uncountable achievements.

“This is why I am sacrificing my monthly allowances to this great person,” he said.

Darazo, an indigene of Bauchi also revealed that he would be meeting with Alhaji Bola Tinubu on May 15, where he would show him his love and hand over his April allowance of N33,500 to him.

“I am only doing this for the love I have for him and I am urging his supporters from various parts of the country to come out to support and appreciate my gesture.