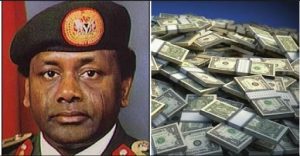 Economists, legal practitioners as well as other professionals and civil society organisations have expressed concerns over the poor management of returned looted funds, especially the money stolen by former Head of State, Gen. Sani Abacha.

Disturbed by increasing wave of corruption across the country, despite the much-talked about anti-corruption campaign of the present administration, the experts are further piqued about indications that returned loots were being re-looted, especially as the financial transactions remained opaque, lacking in transparency and accountability.

This growing fear, perhaps, recently forced the Sultan of Sokoto, Muhammadu Sa’ad Abubakar III to ask the Federal Government to explain to Nigerians how much of the country’s looted funds it has so far recovered.

While the Federal and Delta State governments continue to lock horns over the returned £4.2m stolen by former Governor James Onanefe Ibori, the experts stressed that there was every justification to return the stolen money to the state in the spirit of true federalism.

This was as the Economic and Financial Crimes Commission (EFCC) last Friday said the value of jewellery seized from a former Minister of Petroleum Resources, Diezani Alison-Madueke, stood at about N14.460b, while the Special Presidential Investigation Panel had accused top government officials of misappropriating over a $69bn (about N28.3tn) fund said to have been hidden in Texas bank accounts from illegal oil deals by suspected public officials at the Nigerian National Petroleum Corporation.

Last month, the Federal Government stated that the actual money stolen under Abacha and the amount recovered were unclear. As much as $5b was reportedly stolen by the deceased leader alone.

The funds, basically from oil and gas, which go out of the country as Illicit Financial Flows (IFF) hover around N103t in the last 15 years, The Guardian had earlier reported.

In May 2020, $308m held in accounts based in the Channel Island of Jersey, was sent to Nigeria. The returned monies brought the total of returned Abacha loots to $1.5b.

While stunning revelations continue to emerge daily regarding the extent to which public officials are looting the treasury, most stakeholders are gutted by the lack of accountability, and the gross lack of transparency regarding recovered loots from overseas despite conditions mandating proper use/ application of such funds.

It would be recalled that despite the fact that most states got bailout funds from the returned loot, they still battled to pay salaries.

It is instructive to point out that the condition for the return of the last batch of the money from Switzerland was that the money would be used for the Second Niger Bridge, Lagos-Ibadan Expressway, and the Abuja-Kano Expressway. But the present state of the projects, most stakeholders agree, does not justify that the money was judiciously expended. This development, most experts say, further questions the sincerity of the President Muhammadu Buhari led-administration’s corruption war.

The Director, Media and Public Relations, Federal Ministry of Works and Housing, Oyeboade Akinola, did not respond to calls and messages from our correspondents on the amount so far expended on projects from the returned loot. Same as the spokesman to the Minister of Works and Housing, Hakeem Bello, who did not equally respond to his calls and messages on the matter.

At the Ministry of Finance, Nwodo Charles, the ministry’s spokesperson said he needed time to get accurate information on the matter.

On the state of the projects where part of the fund was to be spent, it was reported that the Federal Government has so far released a total of N116.72b for the much-politicised second Niger Bridge, a project valued at N414b, and expected to be delivered next year.

While the Minister of Works and Housing, Babatunde Raji Fashola earlier said that the Lagos-Ibadan expressway would be completed by December 2021, some stakeholders note that meeting the target may be elusive given the current state of the road, just as the conclusion of the Abuja-Kano Expressway has remained elusive.

While the Africa Network for Environment and Economic Justice (ANEEJ) revealed that 703,506 poor and vulnerable Nigerians, out of an enrolled figure of 834, 948 targeted in the Nigerian social register received a total of N23.742b from the recovered $322.5m Abacha loot returned from Switzerland as at December 31, 2019, under the Conditional Cash Transfer of the Social Investment Programme (SIP), the SIP had been under attack, especially for lack of transparency and accountability.

With the government having a trove of information than the masses on corruption, and failing to willingly divulge it to the public, Okigbo said re-looting of returned looted funds would continue.

“For years, scholars thought that corruption was a principal-agent problem, which informed the various anti-corruption initiatives. But if a “principled principal” is in charge, she/he will ensure that the agents (politicians, bureaucrats, private sector) stay on the straight and narrow. Pay higher wages, and the agents will be less corrupt. Give whistles to the blowers and the corruption will stop. Reduce the discretion of the politicians and bureaucrats over decisions, and limit their powers. Increase the cost of the penalty, and most will shy away from the crime. Governments have tried all of the above with marginal impact on corruption. In fact, in some cases, corruption increased,” he noted.

According to him, the excitement of the new, young anti-corruption czar will ebb very soon when it becomes clear that he is rowing against the tide. Not for lack of intent, but because he is using the wrong tools for hunting the beast.

Okigbo, who maintained that a strong system was necessary, especially one that would guarantee the independence of the judiciary, added that Nigeria might get worse with corruption.

Contributing, the former President of Chartered Institute of Bankers of Nigeria (CIBN) and professor of economics at Babcock University, Segun Ajibola, said the federal government must explain to Nigerians how returned looted funds have been expended.

Ajibola noted that while the administration is being trusted by some to have judiciously spent the returned loot, providing further explanation on the issue would determine if the funds were put to best use.

And for legal practitioner, Madaki Ameh, the general perception by Nigerians, which appears well-founded remains that returned looted funds are routinely re-looted by government officials in the current administration.

“This is because of the opaque nature of the recoveries so far, and a clear lack of accountability on what the recovered looted funds are being used for. Without such transparency and a clear consequence attached to impunity, the practice will continue,” Ameh said.

The Director, Centre for Democracy and Development (CDD), Idayat Hassan, said opacity and lack of transparency have successfully beclouded what the recovered loots have been used for.

According to her, in terms of the recovery proper and monitoring of the asset recovery, a lot has to be done for citizens to be able to pinpoint where the monies are being channeled to, or being spent.

“Aside from the three big projects, what happened to other monies? What exactly were they utilised for, and is government pitching this to the citizens? How is the government communicating it to the citizens? I think those are the fundamental issues,” she said.

She added that corruption has become even more technical, diversified and unabated under the current administration.
Pro-tem President, Chartered Institute of Forensic and Investigative Professionals of Nigeria (CIFIPN), Dr. Enape Victoria Ayishetu opined that she had honoured the Presidency’s invitation on the repatriated loot and had recommended the best way to spend the fund.

Ayishetu noted that the Federal Government had been advised to spend the money through budgeting process to ensure transparency and accountability, but that the advice was ignored.

“We can only advise or recommend options that will ensure judicious use, we can not compel the government to decide. We made our presentation and recommendation, that is the best we can do,” she said.

Ayishetu noted that it was not surprising that corruption continues to thrive in the country despite the anticorruption war, stressing that the country would not win the fight without the right mechanism.

She continued: “Corruption fight cannot be successful without necessary tool. There is corruption everywhere in the world, the only thing that differs is the mechanism people have deployed to tackle or prevent it. Without forensic investigation, we cannot win the war.”

She said a bill to entrench forensic investigation has been facing obstacles in the country, adding that the growing level of corruption in the country was responsible for the level of hardship and insecurity. She insisted that sentiment bogged corruption fight in the country, forcing the war backward instead of meaningful progress.

The Centre for Transparency Advocacy (CTA) alleged that the returned loot is being diverted and not properly used. Its Executive Director, Faith Nwadishi, said the money is being used for the things not meant for, adding that it was difficult to trace how government is spending the money.

This development, according to her, compromised accountability, transparency and deprived citizens the right to information on the way the money is expended.

“Corruption has gotten worse. Policies are only on paper and never implemented. The second tenure of this administration is even worse. It is business as usual. We need to make people give account of what has been happening. The NDCC probe has gone under the carpet. The oversight role of the National Assembly is also being compromised,” Nwadishi said.