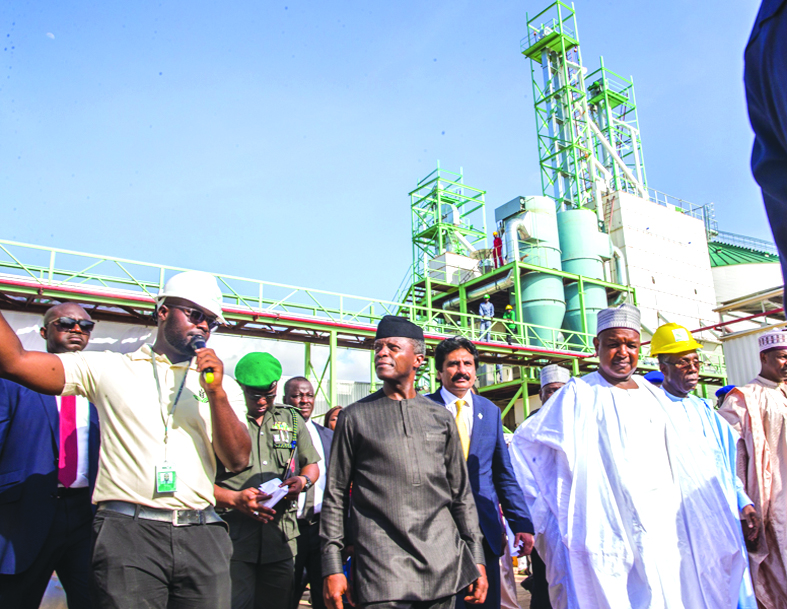 The synergy between President Muhammadu Buhari’s administration and the Central Bank of Nigeria (CBN) to diversify the Nigerian economy and reposition agriculture through the Anchor Borrowers Programme (ABP) as the key driver has started bearing fruit. President Buhari launched the CBN financed N20 billion ABP in March 2016 when he flagged-off the dry season rice and wheat farming in Kebbi State.

One and half year after, Vice President Yemi Osinbajo was at Argungu, Kebbi State early August to commission Africa’s largest parboiled rice mill with an annual capacity to process 120,000 metric tonnes of paddy rice. The mill, which was built by WACOT Rice Mill, a privately-owned enterprise, with more than N10 billion is a testimony that the Federal Government’s policy of making private sector the engine of economic growth and sustainable job generation is being welcomed by private investors.

Osinbajo said that the project underscored the policy of the government that the private sector must be the engine of economic growth. The project, he noted, had proved that Nigeria could actually feed itself. The vice president urged Nigerians to consume home-grown food, stressing that the agriculture policy of the Federal Government would empower the largest number of farmers and encourage young ones. “This is a landmark achievement here, it is a signal to the rest of the countries that Nigeria is not just opened for business but it is set for development,” Osinbajo said.

Rahul Savara, managing director of WACOT, disclosed that the company would invest more than N100 billion in various agricultural value chains in the coming years. He said that so far, more than 5,000 small-holder rice farmers had been trained on good farming practices, financial management, production cost optimisation and yield enhancement techniques. These farmers were the beneficiaries of the ABP, which was initiated by the central bank for fund rice farmers across the country.

“The importance of agriculture to the economy cannot be over emphasised because economic diversification is the only way to prosperity. Go back to the land and develop agriculture because the era of depending on oil is over,” President Buhari had said at the launching of the ABP.

Godwin Emefiele, governor of CBN, described the programme as one designed to create economic linkages between farmers and processors, not only to ensure the output of rice and wheat, but also to bridge the gap between production and consumption.

Kebbi State government wants rice farmers to use the opportunities offered by the ABP to increase rice production to 500,000 metrics tonnes per year. Governor Atiku Bagudu said that “additional farmland would be cleared and young farmers would be provided with funds and extension services to boost production. Strategies would be worked out for transportation of produce to the designated centres.”

The effort to encourage large scale production of rice is not limited to Kebbi State. Another state which is catching up is Kano. Hamisu Haruna, a Kano-based rice farmer said that his productivity has grown by more than 75 percent in the past two years. “My yield has jumped to 35 bags of rice against the 20 I was getting in previous years,” Haruna said, adding that “rice farming has greatly improved. I have had better yield and better price in the market.”

Moreover, some industries such as the GreenPro in Kano State have shifted from specialising in flour and poultry to rice processing. “Rice processing is by far more profitable than flour and chicken feed,” said Salisu Saleh, production manager of GreenPro.