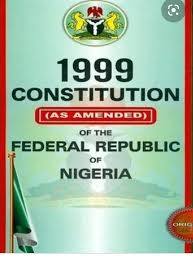 While the controversy rages over the proposed amendment of the constitution by the National Assembly, a coalition of civil society groups has come out solidly in support of the move by the lawmakers to undertake the process.

Recall that major social cultural associations in the country and others had come out with strong opposition to the move to tinker with the constitution, describing it as unnecessary and a waste of time and the tax payers’ money.

Speaking to newsmen in Abuja on Tuesday, the association frowned at the document for denying fiscal autonomy to the local governments and called for a revisit to that section so as to strengthen the tier and make it more functional.

The Coordinator of the of the coalition,  Mr Daniel Soetan, said the concurrent powers provided by the constitution, makes it easy for the states to control the finances of the local governments and dictate what happens, even in matters as simple as market development, primary health care and education.

He called for an end to the formation of caretaker committees for local governments, opting instead for duly elected and fully tenured council administrations.

While commending the National Assembly for its intention to embark on the exercise, which they described as overdue, the coalition also drew attention to the need for an amendment that will guarantee a revenue allocation of 52% to the local governments and 20.6% to the Federal Government.