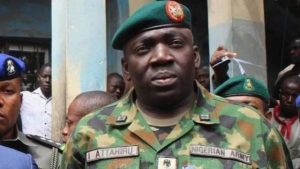 The Chief of Army Staff, General Ibrahim Attahiru has died in a plane crash in  Kaduna State.

reports suggests that there was no survivor in the crash.

General Attahiru was born on August 10, 1966 in Doka, Kaduna State.

He joined the army as a cadet officer in 1984 and commissioned into the rank of Second Lieutenant in December 1986 as an Infantry Officer.

Gen. Attahiru was a highly decorated Officer who went on many tours and was awarded The UNAMSIL Medal, ECOMOG Medal, Forces Service Star, Meritorious Service Star, and many other military awards and medals.

He was appointed the 21st Chief of Army Staff of the Nigerian Army on 26 January 2021.