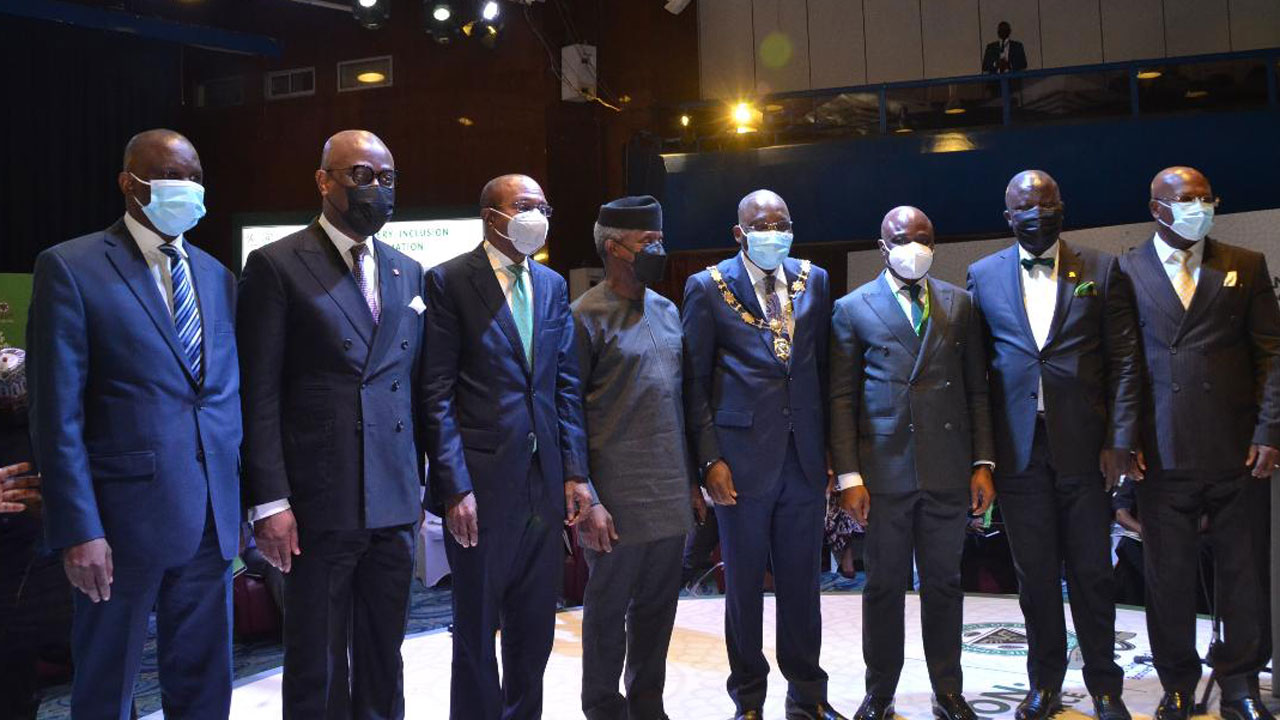 President Muhammadu Buhari, his Rwandan counterpart, Paul Kagame and Vice President Yemi Osinbajo yesterday, made a strong case for a financial system that works for all.

Speaking at the ongoing 14th yearly banking and finance conference holding simultaneously in Abuja and Lagos, the political leaders urged bankers to seize the opportunity in the emerging digital economy to build an inclusive, supportive and enduring financial system.

Buhari, who hooked up with the session where an estimated 10,000 hybrid participants met to deliberate the crucial task of pulling the economy from the claws of COVID-19 from the State House, said COVID-19 had changed “everything around us” while creating new business opportunities, especially in the digital space.

“Digital evolution is a watchword for survival. We must harness all the opportunities but also be mindful of the risks,” the President said. According to him,  there are massive opportunities in the African Continental Free Trade Agreement (AfCFTA), which he charged Nigerian banks to leverage in building a resilient economy.

Kagame, who also joined from Kigali, charged financial institutions to seek expression in the most challenging issues facing Africa and contribute to building a continent to work for all. “The banking sector must understand its role in building a resilient economy as we look forward to working together to build Africa that works for all,” Kagame said.

He also called for aggressive pursuit of an inclusive financial system, saying banking services should not be exclusive to the elite in the face of growing poverty.

Corroborating Kagame’s position, Osinbajo called on banks to continue to play an active role in the campaign for poverty reduction and job creation. He described the housing sector as a bastion of unemployment reduction and output growth but expressed concern that the sector had not attracted sufficient funding attention.

He made a case for the development of a long-term funding arrangement that could unlock the potential in the infrastructure and industrial sector. According to him, the Federal Government’s rural electrification project holds a golden opportunity for Nigerian banks.

Osinbajo admitted that the banking sector had supported the country’s economy in many ways, including “creating good-paying jobs” but insisted they needed to do more to support the next phase of growth.

He also called on banks to work with the government to deepen financial literacy while introducing innovative products to increase inclusiveness.

The Vice President noted that the sector has a crucial role in the country’s economic recovery, which the Governor of the Central Bank of Nigeria (CBN), Godwin Emefiele described as “fragile” notwithstanding the impressive second quarter gross domestic product (GDP) performance.

Emefiele, the host of the conference, said efforts must be made to prevent the resurgence of COVID-19 to sustain the growth momentum as demonstrated by the 5.01 per cent growth recorded in the second quarter. He noted that the Nigerian banks were strong and resilient enough to support the economic recovery process.

He said that the CBN would, in the next 12 months, establish the Nigerian International Financial Centre (NIFC), which would act as an international gateway for capital and investments, driven by technology and payment system infrastructure.

He said: “This new financial hub will curate local and international banks to make them global champions. The NIFC will be a 24/7 financial centre that will complement London, New York and Singapore financial centres and enable an acceleration of our home-grown initiatives such as Infracorp Plc, the N15 trillion infrastructure fund which we will be launching in October 2021.

“The NIFC will also complement our initiatives on the Nigerian commodity exchange and the National Theatre creative hubs for our youths as well as the e-naira project, which will also debut in October 2021. The NIFC will take advantage of our existing laws such as the BOFIA 2020, NEPZA and other CBN regulations to create a fully global investment and a financial hub where monies, ideas and technology will move freely without hindrance.”

Despite the growth of the sector, Emefiele said, close to 36 per cent of adult Nigerians lack access to financial services. He noted that “improving access to finance for individuals and businesses through digital channels can help to improve financial inclusion, lower the cost of transactions, and increase the flow of credit to businesses”.